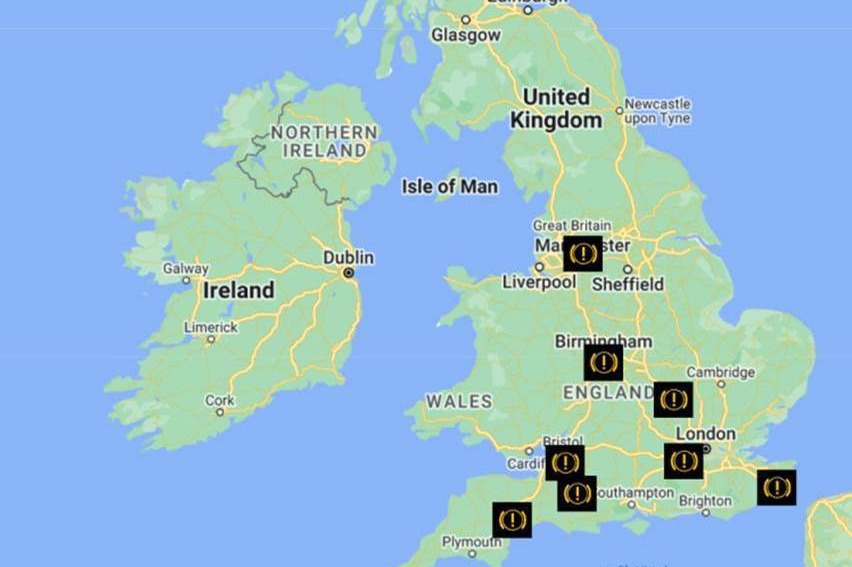 DRIVERS have been warned roads could go into a ‘meltdown’ TODAY as a perfect storm of families heading on holiday, rail strikes and sporting events will incite long tailbacks.

Congestion will fuel travel chaos across the country, but drivers should be wary of these worst-hit roads, the AA warned.

Motorists will face travel delays across the UK from today and into tomorrow as the AA has issued a ‘yellow alert’ for traffic.

Cars will start to pile up between 11am and 3pm on both days as holidaymakers and sports fans hit Britain’s motorways.

The worst of the congestion is expected as sun-seekers flock south-east towards the Port of Dover and the Eurotunnel terminal at Folkestone.

Last weekend tens of thousands of Britons experienced travel hell as cars queued up to 30 hours to cross the Channel for a short break in Europe.

It took families up to six hours to move just 75 meters as delays caused miles of blockages over the summer holidays.

A lack of French border guards and a serious accident on the M20 have been blamed, but ports are hoping changes to their traffic and passport control systems will prevent a repeat of last weekend’s disaster.

With holidaymakers queuing for two hours at Dover yesterday, ferry operator DFDS has urged passengers to “allow 120 minutes to complete the check-in process and border controls”.

Drivers traveling within the UK should be wary of the following roads.

As you drive towards Devon and Cornwall, beware of congestion along the M5, A303 and A30.

There could also be delays on the South West and West sections of the M25 and at the Bristol M4/M5 junction.

Keep an eye out for traffic congestion on the M6, M42, M1 and M62 this weekend as well.

Amid the summer holiday stress this month, auto experts gave motorists their top tips for merging onto a freeway correctly and avoiding lengthy traffic jams.

The AA also warned Britons of the importance of checking their car before traveling to avoid unnecessary breakdowns that could slow or even stop other road users.

Jack Cousens, the AA’s head of road policy, said: “We really hope it doesn’t happen, but our road network is on a razor’s edge and it doesn’t take much for it to collapse.”

He explained: “With holiday rental changeover day starting on Friday, mixed with train strikes and a huge sports weekend, we are concerned that drivers across the network will experience delays, with southern England particularly vulnerable.

“All eyes will be on Dover and Folkestone but we believe changes have been made throughout the week and we are crossing our fingers for a smoother journey across the English Channel.

“Breakdowns can exacerbate congestion and last weekend we saw an increase in breakdowns where vehicle checks were not carried out before departure.

“Spending 10 minutes checking tires and fluid levels before setting off can make a world of difference when it comes to helping people reach their destination.

“In addition to preparing the car, those who use the car for long journeys should prepare for jams, take plenty of food and water, and entertainment for younger travelers.

“By downloading the AA app you will stay up to date with the latest traffic news and at worst it can be used to report a breakdown.”

National Highways, which manages England’s motorways and major A roads, added: “Drivers traveling in and around Kent are advised to plan ahead as this weekend is likely to be very busy.