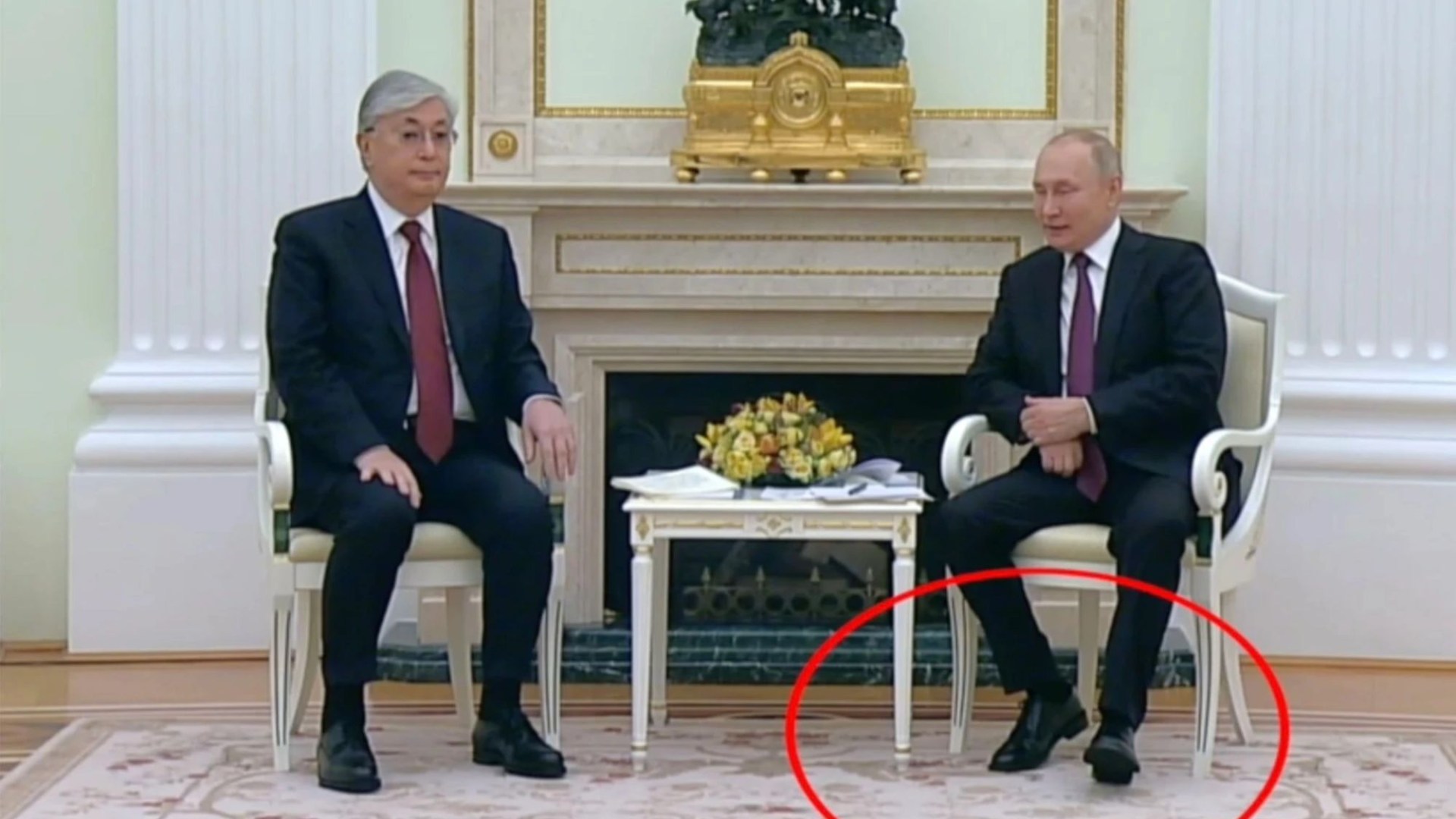 This is the moment Vladimir Putin’s feet appeared to twitch and spasm during a meeting, a possible sign of Parkinson’s disease.

The Russian President, 70, who is reportedly “seriously ill”, met with Kazakh President Kassym-Jomart Tokayev, 69, on Monday.

During the tense talks in Moscow, Putin’s feet twitched and spasmed – a symptom of Parkinson’s disease.

Footage showed his legs jerking and his feet tapping as he spoke to cameras about the “special significance” of the meeting.

He was also spotted grasping his right arm with his left hand during the talks – months after limping down a red carpet with his right arm hanging limply at his side.

It comes after bomb spy documents leaked to The Sun Online appeared to confirm that Putin has Parkinson’s and early-stage pancreatic cancer following months of rumours.

At Monday’s awkward meeting, Putin and Tokayev exchanged documents with a brief handshake and eye contact — but only for a split second.

The Russian tyrant was snubbed by Tokayev when the Kazakh leader made crystal clear his disapproval of Russia’s invasion of Ukraine.

At the signing ceremony, Tokayev sat in front of his host and did not converse with the Russian leader.

After they signed a document marking 30 years of diplomatic relations, Tokayev briefly delayed the deal with Putin, then hastily handed it to an aide.

Looking bloated and tired, Putin still held up his copy of the agreement while posing for the cameras.

Tokayev said there was “every reason to be satisfied” with Russia-Kazakhstan relations, but warned Putin: “You have to look ahead and that’s why I came here.”

As Tokayev greeted Putin, he seemed to purposely avert his eyes from the warmonger.

Kazakhstan has angered the Russian dictator by allowing tens of thousands of men fleeing his draft to seek safe haven in the country.

Like other ex-Soviet leaders, he failed to give Russia the support it wanted in the Ukraine war.

“We must not allow the fraternal Russian and Ukrainian peoples to part for tens or hundreds of years with mutual unhealed grievances,” Tokayev Putin lectured at a security conference in Armenia last week.

Tokaev called for a “joint collective search for a formula for peace” in Ukraine.

The Russian tyrant’s health has long been a subject of speculation – Western intelligence agencies suggest he has serious health problems.

He was recently pictured with what are believed to be traces of an IV treatment on the back of his hand – amid rumors he is suffering from cancer and crippling pain.

Kremlin officials have always denied anything was wrong with their leader.

Putin has long prided himself on his “strongman” image – but his dramatic transformation in recent years has led to speculation that he may be suffering from a serious physical illness.