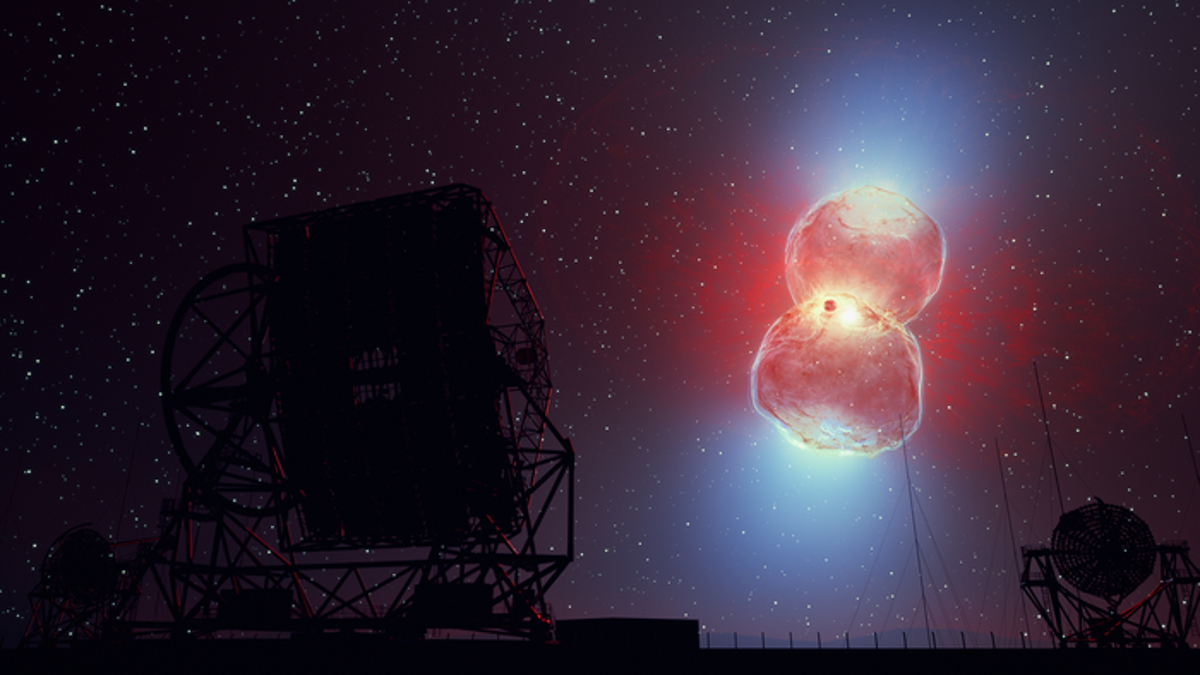 Thanks to amateur astronomers, new technology, and a quick response from professional observers, researchers have witnessed for the first time a cosmic explosion that hurled particles close to the cosmic speed limit.

In a new study published Thursday in the journal Science, an international team of researchers using the High Energy Stereoscopy System or Hess, describe their observations of a massive explosion on the surface of a white dwarf star called Nova. They found that the resulting shock wave accelerated gamma rays to their theoretical speed limit in astrophysicists’ models, very close to the speed of light.

According to study author and PhD student at Deutscheselektronen-Synchrotron, Ruslan Konno, this is a finding that suggests the physical conditions around novae can come close to theoretical ideals, which he says has huge implications for astrophysics.

“It suggests that the acceleration process could be just as efficient in their much more extreme relatives, the supernovae,” he said in a statement.

It’s also possible that novae could be a source of cosmic rays, the constant shower of high-energy particles that astronomers watch pour down on Earth from all directions. The exact origin of these rays is the subject of active research.

While a supernova occurs when a giant star dies, a nova is a smaller explosion on the surface of a much smaller star, a white dwarf. And unlike a supernova, novas can occur without destroying the star and can even repeat themselves at regular intervals.

Novae occur when a white dwarf in a binary star system steals material from a larger companion star, usually a red dwarf. When enough stolen star material accumulates on the white dwarf’s surface, it triggers a runaway fusion reaction — a thermonuclear explosion that releases in seconds 10,000 to 100,000 times the energy Earth’s sun produces in a year .

The massive nova blast creates concentric, hourglass-shaped shockwaves that blast out into space, compressing any ejected stellar material in front of them. This compressed material is energized, releasing and accelerating particles – the gamma rays that astronomers look for with instruments like Hess.

Mr. Konno was one of more than 230 researchers from 41 different research organizations who used Hess to study the Nova RS Ophiuchi when it exploded in August 2021. RS Ophiuchi is a recurring nova about 5,000 light-years away that exploded in 2006 and 1985 before her latest fireworks.

It was amateur astronomers who first alerted the Hess team that RS Ophiuchi had once again departed, and the Hess team’s quick response – and a special new camera attached to a Hess telescope in Namibia – made it possible the researchers to observe the blooming of the nova in real time. They measured the gamma rays from the blast for more than a month and found they were a hundred times more energetic than any observed in previous novae.

The Hess facility uses five gamma-ray sensitive telescopes that are part of the forthcoming Cherenkov Telescope Array, a global network of telescopes designed to study gamma-ray phenomena in the sky. A key goal for the Hess and Cherenkov arrays will be to study other novae to see if they too exhibit the strong particle acceleration properties of RS Ophiuchi.

“In the next few years, research with the [Cherenkov Telescope Array] Telescopes will show if this type of nova is anything special,” Hess director Stefan Wagner said in a statement. “This measurement is another success in gamma-ray astronomy and an encouraging sign that we can study many more cosmic explosions with HESS and future gamma-ray telescopes.”