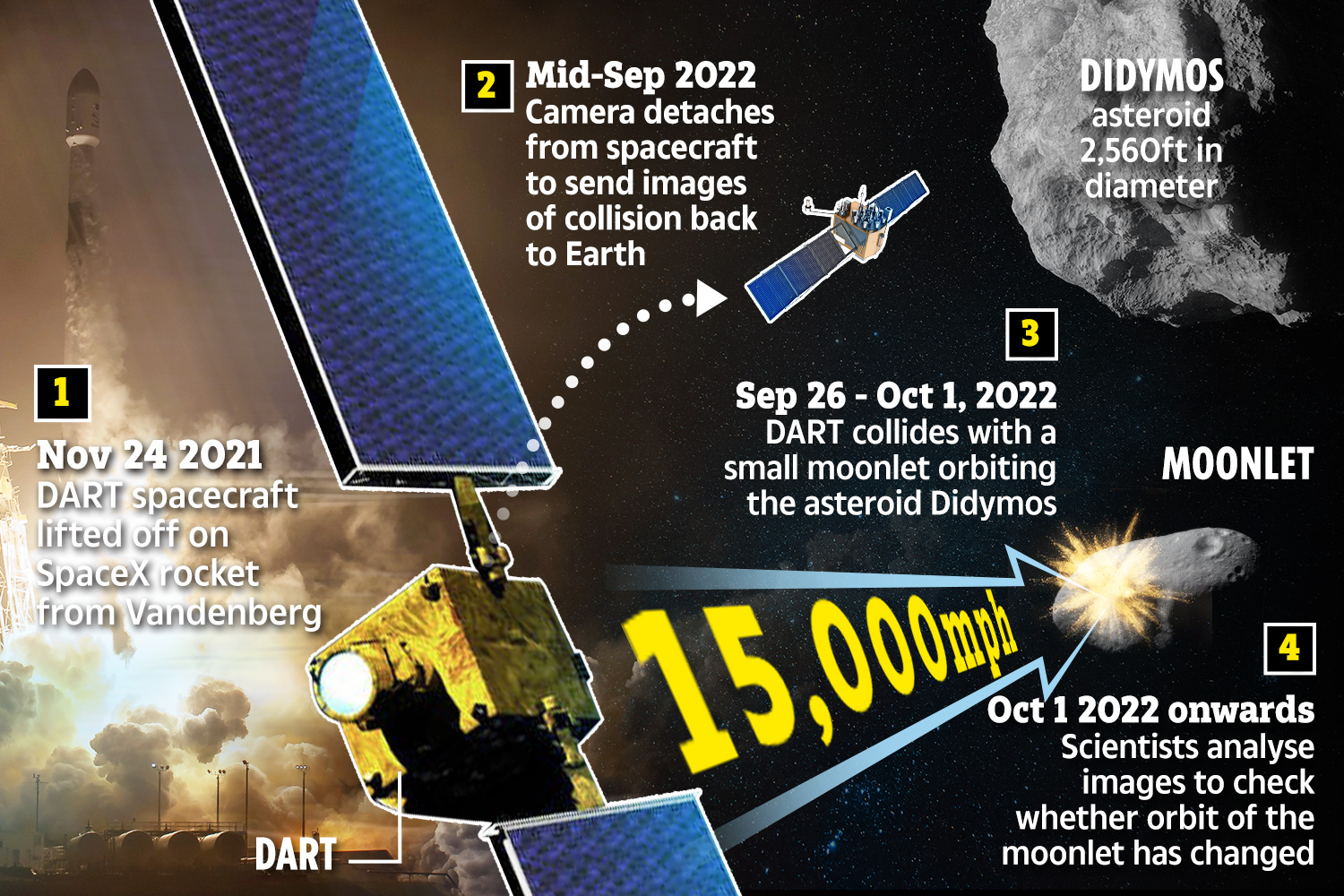 A GROUNDBREAKING Nasa spacecraft is on a suicide mission that could save humanity’s future.

The ambitious project, involving teams from NASA and the European Space Agency, is a test of technology to prevent a killer asteroid from hitting Earth.

Should it prove successful, it could pave the way for a new planetary defense system capable of deflecting incoming space rocks before impact.

The scheme mirrors the plot of the 1998 blockbuster flick Armageddon, in which Nasa flies a spacecraft to an asteroid to prevent it from hitting Earth.

“DART will be the first demonstration of kinetic impactor technology to alter the motion of an asteroid in space,” NASA says on its website.

The DART spacecraft consists of a box-shaped body about twice the size of a washing machine, flanked by two 18-metre-long solar panels.

On November 24, 2021, it launched aboard a SpaceX Falcon 9 rocket from Vandenberg Air Force Base in California.

DART will reach the binary near-Earth asteroid Didymos about nine months later, in September – 11 million miles from its home planet.

Didymos is about 740 meters in diameter and is located between the orbits of Earth and Mars. It’s not the primary focus of the mission.

Instead, NASA’s intrepid battering ram will target a smaller asteroid — or moonlet — that closely orbits Didymos.

DART will smash into space rock at 15,000 miles per hour to change its orbit around its host.

After DART crashes into its target, NASA and ESA will train telescopes on Earth to verify that the scheme worked.

A tiny probe launched alongside the mission will collect data before, during and after the impact.

“The DART spacecraft will achieve kinetic impact deflection by intentionally crashing into the moon at a speed of approximately 4 miles per second using an onboard camera (dubbed DRACO) and sophisticated autonomous navigation software,” Nasa says.

“The collision will change the speed of the moon in its orbit around the main body by a fraction of a percent.

“This will change the moon’s orbital period by several minutes – enough to be observed and measured with telescopes on Earth.”

That means they are more than 500 feet in diameter, would fly within 4.7 million miles of Earth, and would wreak havoc on impact.

Didymos isn’t seen as a threat to our planet, but DART promises to help Nasa and ESA build a system to protect Earth from space rocks that may get a little too close for comfort in the future.