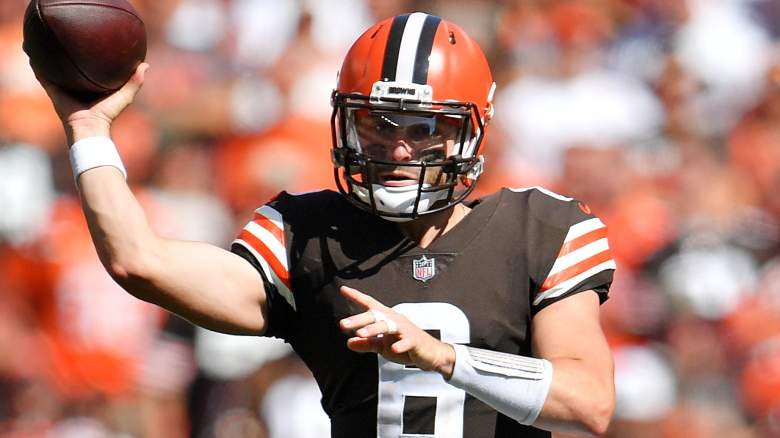 Not much has moved on the trade front with Cleveland Browns quarterback Baker Mayfield, although a tip from his wife may suggest otherwise.

Emily Mayfield responded to a tweet from former Browns linebacker Joe Schobert’s wife. it read: “The hardest thing about our position is knowing so much but not being able to say n-t.”

So maybe some business news was a topic of conversation in the Mayfield household. Just earlier this week, she posted a video of her quarterback husband noting that his surgically repaired shoulder looked “A-okay!”

Baker Mayfield was the subject of a recent article by ESPN’s Jake Trotter, which portrayed his downfall with the franchise that saw him No. 1 overall in the 2018 draft.

One of the key nuggets from that article cited sources close to Mayfield who felt the Browns were intentionally trying to make him look bad during a Week 17 matchup against the Steelers. He was sacked nine times in the matchup.

Mayfield won’t be able to pick his next NFL home unless the Browns take the unlikely step of cutting him. But two things Mayfield will expect from his next stop are an opportunity to start — as he heads into the final year of his rookie deal — and stabilization. Mayfield became the fourth quarterback in league history to play for four different head coaches in his first three seasons.

“I’m looking for stabilization right now,” Mayfield said Monday You never know: You know what I mean? Podcast in April: “Honestly I don’t regret my time in Cleveland for what I tried to give to this place. True Clevelanders and true Browns fans know that, and that’s why I can leave the whole situation feeling like I did it.”

At this point in the offseason, teams in the NFL don’t jump at the chance to trade for Mayfield because they know the Browns have no leverage in negotiations. Mayfield comes in with a salary approaching $19 million, and the Browns want that off their books. However, they’ll likely have to eat some of it in a trade, making it more reasonable for the receiving team.

“It’s a fluid situation,” general manager Andrew Berry said during the draft. “We will deal with it every day.”

The Panthers and Seahawks have been cited as the most active teams in chasing Mayfield, though their interest appears to have faltered recently. The Texans were another team mentioned as keeping tabs on Mayfield, as were the Giants.