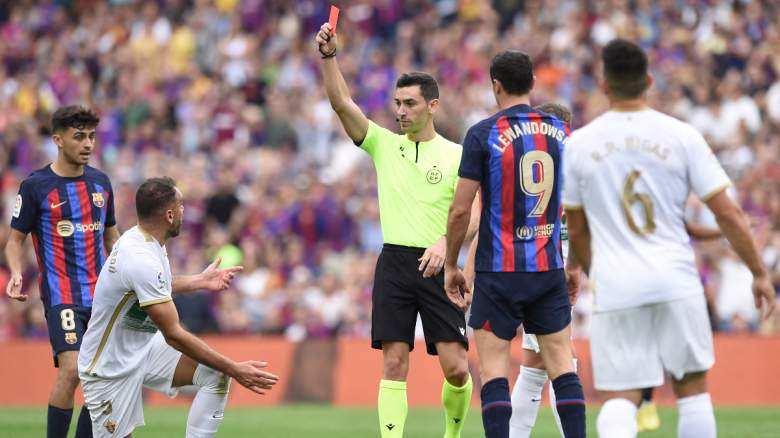 Barcelona striker Robert Lewandowski was treated harshly during the team’s La Liga clash against fighter Elche at the Camp Nou on Saturday, August 17.

The visitors are known for their physical approach and demonstrated it with a wild game against the Poland international that resulted in a red card after just 14 minutes.

Verdu’s challenge brought Lewandowski down but also resulted in the 33-year-old’s early dismissal, leaving Elche to play the rest of the game with just 10 men.

Lewandowski showered Elche with even more misery ten minutes before half-time when he scored from close range after a good cross from the left by defender Alejandro Balde.

Verdu wasn’t the only Elche man sent to Camp Nou. Coach Francisco Rodríguez was also fired after an argument with the linesman. The manager wasn’t at all happy about not raising his flag for offside against Pedri.

At this point, Elche was already 0:2 behind. Memphis Depay had doubled the hosts’ lead in the 41st minute with a brilliant performance. The Dutchman took the ball with his back to the goal, turned around brilliantly and shot high into the net with a sharp shot.

Balde provided the assist again and continues to impress at left-back. The teenager faces competition for his place in the squad with Marcos Alonso and Jordi Alba but is thriving in the early weeks of the new season.

The Catalans also thought they had a third just before the break. Teenage midfielder Pedri had a tap in after goalkeeper Edgar Badia saved a Lewandowski shot but saw his attempt ruled out for offside.