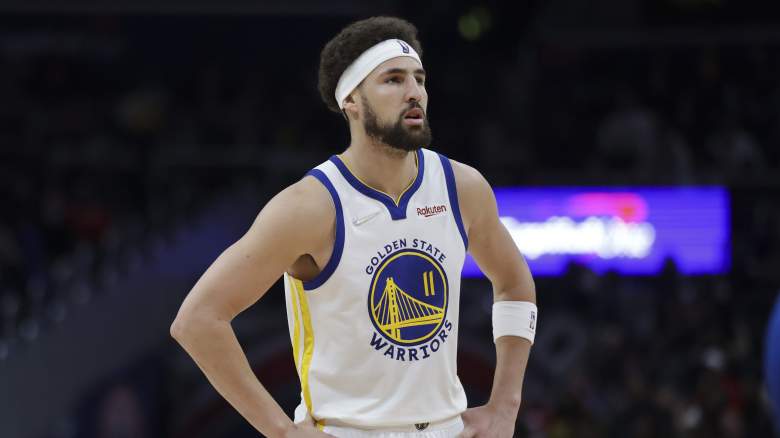 The Golden State Warriors have ridden their big three — veterans Steph Curry, Klay Thompson and Draymond Green — to three titles and five NBA Finals appearances. Now, an NBA analyst suggests those days could be coming to an end.

ESPN’s Kendrick Perkins said on First Take that the Warriors should consider trading Thompson in the upcoming offseason to pave the way for another rising star. Last season, guard Jordan Poole went from being a Golden State-G League streak to becoming one of the league’s breakout stars, averaging 18.5 points, 3.4 rebounds and 4 assists per game, all career highs.

Poole was forced out of the starting lineup when Thompson returned from injury this season, but Perkins suggested the Warriors could find a permanent spot for Poole alongside Curry and Green.

Perkins noted that Thompson’s return created a difficult situation for the Warriors. Completing lengthy rehab in January after two serious injuries, Thompson joined a team that already had one of the best records in the league and Poole as a fixture in the starting lineup. Although the Warriors have had continued success following Thompson’s return, Perkins said the situation may not be viable in the long run.

“If you’re a player recovering from an injury and your team was successful the season before you came back, you have to come in and not try to step on your toes,” Perkins said. “That’s why Steve Kerr couldn’t tug Jordan Poole or pull the minutes, take the ball out of his hands.”

Perkins added that the Warriors could grant Thompson a trade that would allow him to be the leader of another team and give Poole a bigger spotlight, although Thompson has shown no desire to leave Golden State and the franchise appears not being motivated to separate the veteran core. Owner Joe Lacob said there is a long-term plan to develop young players like Poole, rookie Jonathan Kuminga and center James Wiseman alongside the three veterans and create a team capable of fighting for titles for years to come.

Perkins isn’t the first to suggest the Warriors could try to trade Thompson in the upcoming offseason. Last month FS1’s Colin Cowherd told The Herd that Pacific Division rivals the Los Angeles Lakers could be poised for a trade involving big All-Star man Anthony Davis.

Like Perkins, Cowherd suggested the Warriors could use the opportunity to clear the way and allow Poole to play a bigger role. In Cowherd’s proposal, the Warriors would need to bring in injury-plagued Wiseman to complete the deal.

“The Lakers aren’t going to be patient, the Lakers aren’t going to do that, so I’m throwing this at you.” said cowherd. “You call Golden State and say, ‘Jordan Poole is going to be a star, you know it, everybody knows it, and you look at Klay Thompson’s contract, ehhh. We take Klay Thompson, give us James Wiseman, a big guy who can’t stay sane, he’s a project, we take him. We’re going to take those two headaches, Jordan Poole is going to solve one of the headaches, and we’re going to give you Anthony Davis and that solves the other headache.”