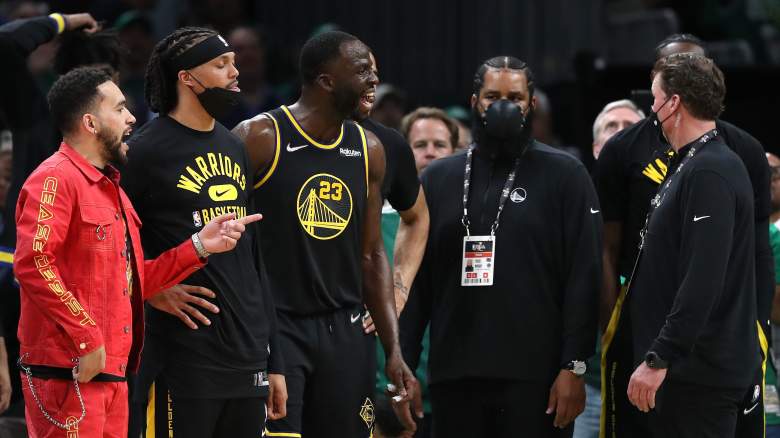 After providing his team with an uplifting spark in Game 2, the Golden State Warriors’ Draymond Green had a night to forget in Game 3.

He played 35 minutes but finished with two points, four rebounds and three assists before being eliminated. Amid the poor performance, Green had to deal with the Boston Celtics crowd chanting “f – Draymond Green” chants.

Both Klay Thompson and Steve Kerr sarcastically commented on how “classy” the fans were during their post-game press conference.

Already in a bad mood after the loss, Green took out some of his frustrations on a reporter. The Dubs forward was asked if he was concerned the Celtics were taking notes on what he said after past podcasts.

Green asked the reporter if he had any specific examples of when he had spoken about trade secrets that were damaging to the team. After the reporter gave an example of adjustments being made to cover Derrick White, Marcus Smart and Al Horford, Green snapped back and accused the journalist of trying to make something out of nothing.

“Oh yeah, these are just competitions,” Green says, laughing. “If that’s X and O, reach for something. But it’s all good, keep it up.

The one thing you find they take X and O away from your podcast? Well, the only thing you said is White, Smart, and Horford. hmm.”

The journalist tried to defend himself by saying he had no intention of making a big deal out of it, but that only made Green want to move on.

“You took a chance,” Green continues with reporter Jake Fischer of Bleacher Report. “Thanks for the podcast promo you just gave me though. The Draymond Green Show. Just mention it like that next time.”

To subsequent questions from other reporters, Green circled back and sarcastically asked if they had any X’s and O’s. This was traced back to Fischer about his comments.

At one point in Green’s response to another reporter’s question, he went back to Fischer to give an example of what wasn’t considered X’s and O’s and called him by name.

“So Jake Fischer, just an FYI, that’s a reference to something that makes someone play left-handed. This isn’t really like X’s and O’s, like letting them literally drive to the left. But we like to let teams play left-handed. And we didn’t do that tonight, and that starts with me.”

It seems Green got in the way of the reporter’s question when he explained why on his podcast after the game that night.

As usual, Green recorded his reaction to the game in his hotel room. He accused Fischer of being one of many who have a problem with him for recording podcasts as a distraction during the playoffs.

“You belong to the masses [think] Draymond shouldn’t be doing a podcast during the NBA Finals.”

Unsurprisingly, Green had no problem pushing back and saying he’d keep podcasting whenever he wanted.

Unsurprisingly, Green had no problem pushing back and saying he’d keep podcasting whenever he wanted.