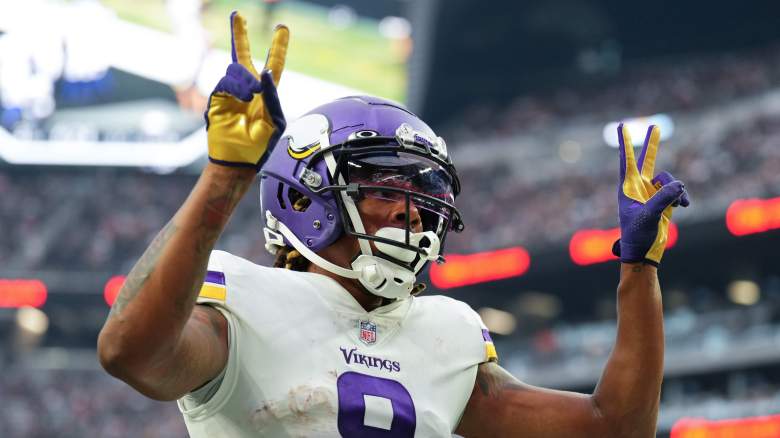 The Minnesota Vikings are pulling out all the stops to keep Jalen Hurts at bay. The team decided to swap out their usual scout team quarterback for a “finesse receiver with highly menacing speed.”

Hurt’s unique abilities – highlighted by his legs capable of yanking defenders out of their studs without warning – have forced the Vikings to prepare for training a little differently. Minnesota Scout Team simulated hurts with Trishton Jackson, a 6-foot-1, 191-pound wide receiver who was undrafted in 2020. Jackson replaces third stringer David Blough.

“It’s pretty cool to play him,” Jackson said of Pioneer Press. “It was fun walking around back there. Just bring me back to my old days. I played quarterback in high school, so it was good to give these guys a look back.

Vikings head coach Kevin O’Connell called hurts a “big, big part” of the Eagles’ running game. He’s the type of player who keeps opposing coaches up at night. Minnesota defensive coordinator Ed Donatell declined to say if he will send a “spy” to Hurts. Linebacker Eric Kendricks was brought outside for this role.

“It takes a combination,” Donatell said. “You do everything all the time and they will notice.”

Jackson – originally set as a Round 5 pick – is the definition of a project player, a real burner who exuded athleticism at the 2020 NFL Scouting Combine: 4.5 in the 40-yard dash, 36-inch vertical, 117 long jump. He averaged 80.8 yards per game for Syracuse and logged five 100-yard reception plays while setting the record for most yards by a junior in school history (1,023).

The Eagles complete their wardrobe for Week 2: midnight green jerseys with white shorts. Miles Sanders was the poster child for Monday Uniform on Twitter.

The team also announced the debut of a cool new weekly feature: Eagles Gameday Poster Playlist, powered by Pepsi. Each week, for every 9 home games, an artist or illustrator will be paired with a rising star in the music industry. They’ll create the matchday soundtrack: a hard-hitting track and an eye-catching poster. music, art, football. Together. Chill Moody is the executive producer and wrote this week’s anthem entitled “Make A Way.”

Vikings head coach Kevin O’Connell was freshly picked from Sean McVay’s coaching tree. He joined Minnesota this year after serving as an offensive coordinator for the Los Angeles Rams (2020-21) after a long stint with McVay in Washington. It is safe to assume that there are similarities in their offences.

Head coach Nick Sirianni tried to provide some insight into what he saw in the film. O’Connell might borrow some of McVay’s concepts, but the Vikings’ offense has different folds than the Rams.

“Small sample size, but yes,” Sirianni told reporters. “I mean, if you go somewhere else and start over, naturally you’re going to do things like you did when you won a Super Bowl, right? I have great respect for Coach O’Connell.

“He’s done a really good job and I think he’s a really good coach. He also has to put his own spin on things. Even though – we say it all the time, although Shane [Steichen] and I feel the same about the game, things will be called differently.”