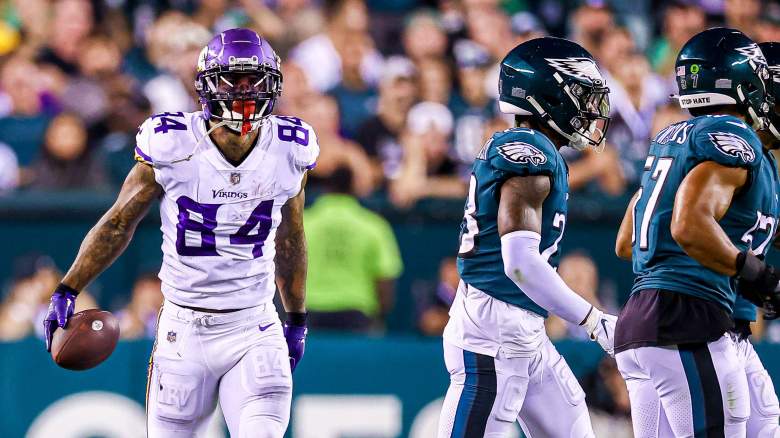 Smith dropped a pass in the first half that likely would have resulted in a touchdown, turning the tide in a miserable first half of the Vikings’ 24-7 loss to the Philadelphia Eagles.

The tight end of the fourth year and the Vikings organization drew criticism from Barstool Sports due to the jersey number he wears.

On Sports’ bar stool Forgive my taking Podcast, the show’s cast not only roasted Smith for dropping the pass, but also the Vikings for not retiring Randy Moss’ jersey number (No. 84), which Smith now wears.

“We defended the state of Minnesota and the city of Minneapolis and the sports hell they were in. But I have to push back. Minnesota, what the hell are you going to do if you don’t take Randy Moss’ act back? Irv Smith dropped that ball, that was a clear touchdown that could have changed the scope of the game and the way it was played. That’s up to you,” Barstool Sports’ Big Cat said on a Wednesday airing of the podcast.

“The fact that you have a tight end when you wear 84, the number of Randy Moss … I don’t want to say it, but that’s a bad sports town move not to retire [the number of] one of the greatest wide receivers of all time. And now the damn Irv Smith is wearing it? drop balls. Drop touchdowns. This is crazy,” Barstool added to Big Cat. “It’s just karma. Irv Smith should drop that ball because Randy Moss’ number is running on the touchline on Monday Night Football.

The podcast also listed the jersey numbers of players Minnesota retired and found another blatant omission, John Randle’s No. 93.

“What are you doing, Minnesota?” Big Cat pleaded.

It seems inevitable that Moss’ number will eventually be withdrawn, however, there have been no official public statements from the Vikings on the matter yet.

While Smith has been scrutinized for his fall, the tight fourth-year end is still coming back from thumb surgery that set him back in his first training camp since missing the entire 2021 season with a meniscus injury – the much bigger concern of his final injury spell.

It wasn’t all bad for Smith on Monday. He caught five passes for 36 yards for eight goals and one touchdown. Most importantly, he still displayed the run ability that made him a second-round contender after college in this third-down conversion.

Smith is in the final year of his rookie deal and will need to field this season if he is to earn a second contract from the new Vikings regime.

“Such a defeat is not nice, we don’t take it lightly at all, but at the same time we have a long season and we know our goals. As a team, we’re just going to come together, take that and look each other in the eye as men and move forward,” Smith said in a Sept. 19 locker room interview. “Your goal as a tight end and offense player is to get touchdowns and put points on the board. When I did that I was definitely excited, some pieces I would have liked to have done but there is room for improvement.”