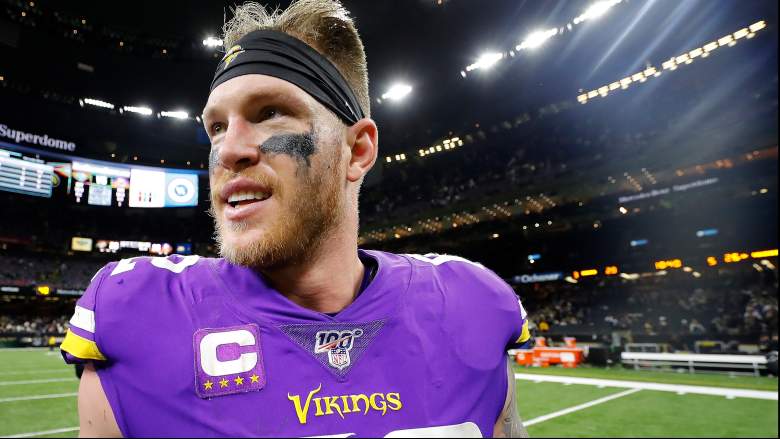 Minnesota Vikings tight end Kyle Rudolph is ending his first season without the Vikings after a decade of wearing purple and gold.

And while he enjoyed his time with the New York Giants, Rudolph is open to a return to Minnesota.

The former 2011 second round winner appeared on KFAN radio show #92Noon with Paul Allen on June 21 and raised the possibility of playing for the Vikings again with one final goal in mind.

Rudolph and his family, who split between New Jersey and Minnesota last season, returned to Minnesota after the 2021 NFL season.

When asked by Allen if he would like to stay in Minnesota full-time and rejoin the Vikings, Rudolph had no hesitation.

Absolutely,” said Rudolph. “I said it as I walked away from here, ‘Minnesota is always home.’ I became more aware of this when we came back from New Jersey after last season. Whether it’s at the grocery store in Wayzata or at a Timberwolves game… [or] WWE Smackdown this Friday. “Come Home Kyle” chants erupted in the middle of one of the games.

“Being in town after we’d gone and the amount of people saying, ‘We wish you were still here…’ just the amount of love that I and my family got from people across the state , really opened our eyes to how much we are admired Vikings fans and the love they have shown us over the last ten years of our lives here.”

Rudolph, the franchise record holder for most tight end touchdowns (48), is about 1,800 yards from overtaking Steve Jordan for most yards with a tight end but would much rather win a Super Bowl above his records , he added This year’s Vikings team has a chance to make that a reality.

“Certainly there is one more thing for me to do here and that is to win a championship in Minnesota. Of course I would love to have another chance to crack it. I talked about being calculated on my next decision. I’ve never won a Super Bowl. I would love to raise a Lombardi at some point in my career. I think this Vikings team has the chance to do that, and of course I would be open to that.

After playing on a limited basis in New York, Rudolph added that so far this offseason he’s passed on opportunities to sign elsewhere, choosing to forgo minicamps and OTAs to continue training and his family for now to stay rooted in Minnesota.

“This is home. I’m rooted in the community, we’re in the city, and I just know what a championship would mean for this state and for this organization,” Rudolph said. “That was kind of the big regret when my time ended with the Minnesota Vikings.”

Rudolph concluded by saying he’s waiting for the “perfect opportunity,” wherever it may be, and is physically “ready to go.”

There is growing expectation that the Vikings will use more three-wide receiver sets under first-year coach Kevin O’Connell after watching O’Connell and the Los Angeles Rams find success with those personnel .

Los Angeles was lauded for its commitment to 11 staff sets (one running back, one tight end, three wide receivers) after using the formation on 83.6% of their offensive snaps.

However, it was largely a commitment to an offensive philosophy made out of bad luck when tight end Johnny Mundt went down with a torn cruciate ligament in October 2021.

“If you look at what we did in LA, at one point we had Robert Woods, we had Cooper Kupp and then we sort of mixed in Odell [Beckham, Jr.] towards the end when Robert was outside. So it’s really about the staff you have. We were more than 12 employees earlier in the year when we had a man [tight end] Johnny Mundt who was an effective blocker with 12 people [tight end Tyler] hig bee Later that wasn’t the case,” Phillips said, per Vikings.com.

In 2020, with a healthy Mundt and Tyler Higbee, the Rams had several games where they used 12 more personnel packages (one running back, two tight ends, two wide receivers) than any other package.

Minnesota should still expect to see more 11 staff records than in years past, but being multiple is the biggest MO for O’Connell and co.

Irv Smith Jr. should see a lot of action, but other than him, the Vikings don’t have as many options at the end after Tyler Conklin’s departure. Rudolph could provide both pass catching and blocking experience for the Vikings and likely an affordable deal with his desire to return to Minnesota.

There is growing expectation that the Vikings will use more three-wide receiver sets under first-year coach Kevin O’Connell after watching O’Connell and the Los Angeles Rams find success with those personnel .