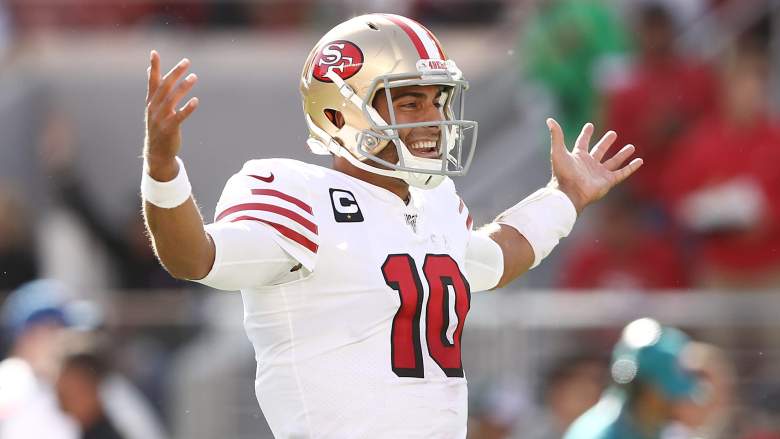 The unofficial rumor floating around the water cooler during this NFL offseason is that sophomore quarterback Trey Lance is expected to take the reins from Jimmy Garoppolo and lead the San Francisco 49ers at the start of the 2022 season, but as of May, Garoppolo is still on with the team.

While potential landing spots seemed very fruitful prior to the draft, the teams that could potentially trade for Garoppolo are dwindling now that the Seattle Seahawks have expressed they are not interested in trading for someone with Garoppolo’s veteran QB status.

At least according to Seahawks head coach Pete Carroll.

During an interview with Sports Radio 93.3 KJR-FM, Carroll offered a general response about whether Seattle would trade for a seasoned quarterback with “starting experience,” ESPN reported.

“We’re always competing,” Carroll said. “I’m not saying anything you didn’t think I would say, but luckily we’ve always worked that way and it fits again. So we’re looking. I don’t see us doing a trade for anyone at all. I don’t see that. But we will certainly continue to be open to opportunities to help our club and in the meantime we will just fight and pull our tails off. There are always opportunities, so we remain open to them.”

Carroll’s comments address more (but not directly) the rumors that Seattle may have been interested in acting for Cleveland Browns quarterback Baker Mayfield, albeit not officially. Mayfield, who the Browns are actively seeking after getting Deshaun Watson, appeared on the YNK podcast in April and said that Seattle or Denver are “probably the likeliest option” for him.

What does this mean for Jimmy?

The limbo the 30-year veteran is currently walking appears to be stretching ever longer as fans look on in exasperation. Could AFC South be a viable option as Seattle closes a door in NFC West?

The Texans may start sophomore quarterback Davis Mills next season, but Las Vegas bookmakers don’t believe Mills can put Houston in the winning column any time soon. Betting odds are leaning towards the Texans taking a top-picked quarterback of the 2023 NFL draft — should they land it, Sports Illustrated reports.

If they don’t want to wait that long and are looking for an experienced backup who could potentially compete with Mills for the starting role, Garoppolo’s reunion with Caserio makes logical sense.

Or there’s another option that ‘Niners fans might not want to hear.

Garoppolo is no Ryan Tannehill.

The Tennessee Titans quarterback has responded to his May 3 comments that he didn’t want to actively endorse former Liberty QB Malik Willis, the Titans’ third-round draft pick.

“That’s part of being in a quarterback room, in the same room — we compete against each other, we watch the same video, we do the same drills.” said Tannehill. “I don’t think it’s my job to look after him. But if he learns from me on the side, that’s a great thing.”

While some Garoppolos see “nice guy” as something holding him back, or just an “plot” itself, it can come in handy for the 49ers – if they can’t find a suitable trading option.

“No, there’s no awkwardness at all,” Lance said last July. “We’re good friends. We need to spend a lot more time together now and we’re certainly looking forward to continuing to learn as much as we can from him.

“He’s one of the best people I’ve ever been with on and off the field. I’m just super excited to learn as much as possible from him this year.”

As NBC pointed out, Garoppolo is known for his leadership abilities in the locker room and on the field, and his teammates have consistently praised him for it, including wide receiver Emmanuel Sanders, who gushed about the quarterback’s “swag.”

“I’ve played with a lot of quarterbacks. If I tell you this guy is a leader, he is a leader. He allows people to follow him not only as he works but also when he comes in and runs meetings like coaches? He is a born leader.”

If San Francisco ends up keeping Jimmy, it’s clear his teammates will support him and hopefully he’ll continue to embrace his role as leader by supporting 21-year-old Lance on his football journey.

While some Garoppolos see “nice guy” as something holding him back, or just an “plot” itself, it can come in handy for the 49ers – if they can’t find a suitable trading option.

The Best Mother’s Day Quotes for 2022: Sayings in Honor of Mother

The Best Mother’s Day Quotes for 2022: Sayings in Honor of Mother