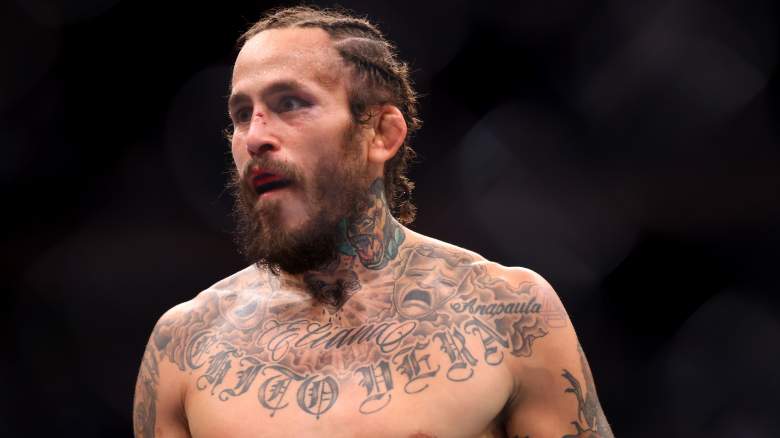 Rising UFC bantamweight star Marlon “Chito” Vera recently got a new tattoo on the back of his head, and former doubles champion Henry Cejudo responded in an unsurprising way.

Chito (20-7-1), winner of four straight wins, now has what appears to be a black and bloody panther on his scalp. MMA Junkie’s Mike Bohn shared a photo of Vera’s new ink via Twitter, which can be seen above the embedded tweet below:

Well, “Triple C” wasted no time commenting on the tattoo, reply to the tweet: “Now you’re a cunt in front and behind.”

A little later, Chito shared a photo of Cejudo working as an analyst while standing on a box and wrote, “Tippy toes.” See below:

With Chito tied for fourth in the 135-pound division and Cejudo a former champion looking to make a comeback and eyeing the next bantamweight title opportunity, the two appear to be on a collision course — be it for their next fight or in the future.

Triple C took a swipe at Chito a few days ago when he wrote a tweet aimed at Division No. 1 contender Sean O’Malley. “Sean, nobody thinks you beat Yawn (Petr Yan),” Cejudo tweeted. “I’ve seen better choices on ‘Married at First Sight.’ The only title you should get is Most Likely the 3rd Island Boy. I would hit you and Cheeto with TJ’s (TJ Dillashaw) shoulder, Kattar’s (Calvin Katter) leg and Aljo’s (Aljamain Sterling) vagina.”

That prompted a response from Vera, who tweeted back: “Henry, suck ad***, you fat little shit.”

Sterling, the current 135-pound king, made his second title defense at UFC 280 last month when he defeated Dillashaw via TKO in the second round. Afterwards, Sterling announced that he had no plans to fight again until later in 2023.

And if that’s the case, O’Malley recently said on his YouTube channel that he wants the rematch Chito on the line with an interim strap-on.

“I see Aljo sheds a lot of weight,” said O’Malley (h/t MMA Junkie). “He’s probably back at 165,170, he’s probably saying, ‘I don’t want to lose weight again in the next few months, I want to enjoy it.’ … He wants to wait eight months. I get it, I do, but let’s say the #1 contender ‘Suga’ Sean O’Malley is ready to go in March and the next guy in line I think should be ‘Chito’ Vera . He just beat Dominick Cruz, beat Frankie Edgar, beat some good guys.

O’Malley and Chito originally faced each other at UFC 252 in August 2020 and Vera won the fight via technical knockout in the first round. Since then, “Suga” has been unbeaten in his last five Octagon appearances. And before Sterling’s fight with Dillashaw, O’Malley scored the biggest win of his career when he ousted former bantamweight champion Yan on the scorecards by unanimous decision.