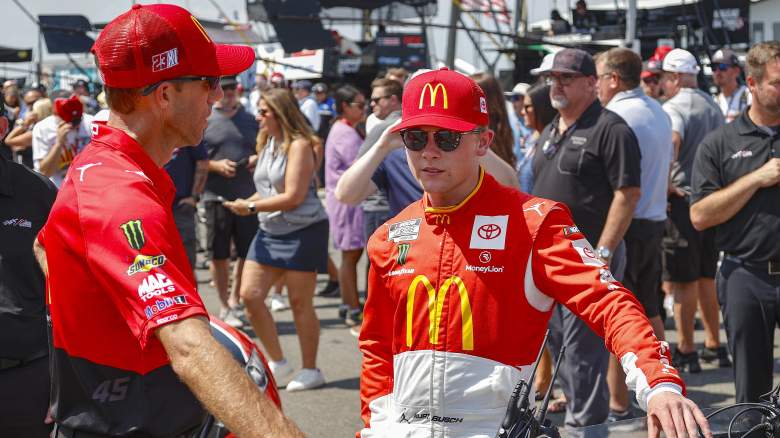 Joe Gibbs Racing’s Ty Gibbs made his Cup Series debut on July 24 at Pocono Raceway as a replacement for an injury to Kurt Busch. He got a top 20 finish, which was a great learning experience, and he responded with some strong words.

“It was a learning day. I felt like I learned a lot,” Gibbs told NBC Sports after exiting 23XI Racing’s No. 45 Toyota Camry TRD. “I’m very grateful. It was almost a top 15. It was fun racing with Brad (Keselowski). I never thought I’d be racing with these guys. It was just cool alongside them on the track to be. So that means a lot to 10-year-old Ty. I don’t think I would ever expect that.”

The defending Xfinity Series Rookie of the Year was within reach of a top 15 finish after starting the day in a back-up car at the back of the field. He eventually dropped to 18th place after battling with Aric Almirola, Brad Keselowski, Chase Briscoe, and several other Cup Series winners. Although Gibbs moved up to 16th place after NASCAR disqualified both Denny Hamlin and Kyle Busch for failing post-race inspection.

When NASCAR announced that doctors had not cleared Busch to compete in the M&M’s Fan Appreciation 400, there were questions about his replacement for the Cup Series race. 23XI Racing provided the answer by stating that Gibbs would make his debut while driving the No. 45 Toyota Camry TRD.

There are several drivers who could have stepped in at any time. Kyle Busch Motorsports driver John Hunter Nemechek has a full Cup Series season on his résumé, while Joe Gibbs Racing’s Brandon Jones has extensive experience at all NASCAR tracks, albeit in the Xfinity Series.

Hamlin and 23XI Racing ultimately chose Gibbs after some discussions with Michael Jordan and key decision makers from both Toyota affiliated organizations. The reason for this is that it offered Gibbs a unique experience.

Simply avoiding wrecks and learning how the next generation cars drive should have been a difficult task for Gibbs, especially with no previous Cup Series experience. He pulled through and got a top 20 finish. He also avoided some other problems.

One of the most difficult tasks for Cup Series drivers is to complete green flag pit stops without receiving penalties. It’s all too easy to accelerate, miss pit lane, or lug gear away while trying not to fall too far behind the field.

Gibbs received only one penalty during the M&M’s Fan Appreciation 400. He walked to his booth with Cole Custer before the pit lane opened on lap 11. Both drivers had to drop to the back of the field on lap 12 but had plenty of time to work their way back up the field.