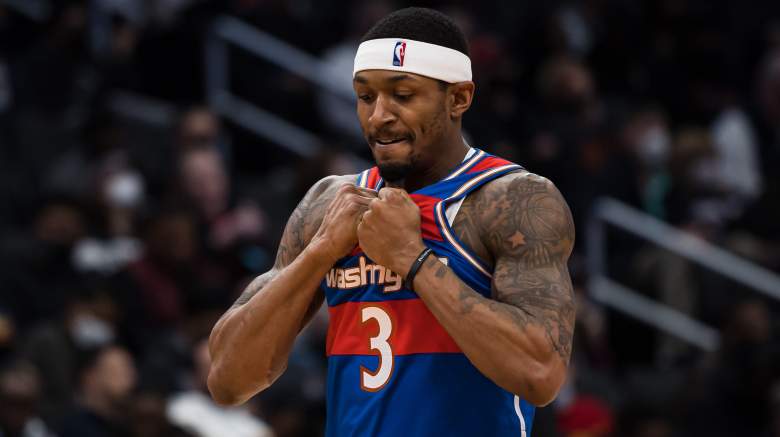 The Miami Heat have been linked with Washington Wizards star Bradley Beal for years, and trade report rumors have reached a fever pitch considering the shooting guard is entering the final year of his contract.

In an interview with Bleacher Report’s Taylor Rooks, the 28-year-old was confronted with his upcoming decision. “You could sign a five-year, $242 million contract if you stayed with the Wizards,” Rooks says. “You go somewhere else, four years $179 million[ion], obviously big numbers, but one difference. And that means you’re in a very rare position where you can control what you do and where you go.”

“Does that come with any fears? Because you are the person who decides what the rest of your career will be like.”

Beal doesn’t seem too stressed by the question. “These are big problems, you really can’t make a wrong decision,” says the three-time All-Star. “I’m blessed to be here.” While he admits, “There are some fears, and time is ticking … it’s fun to be in the position.”

Addressing the outside noise surrounding Beal’s decision, Rooks tells him that most people’s take on his decision is, ‘Am I going to win? Or do I choose money?” If Beal re-signs with the Wizards, he will have the largest contract in NBA history, according to Sportsnaut.com.

Beal replies, “It’s a blessing and a curse. because financially yes, it’s a lot of money,” noting that most people wouldn’t turn down an additional $63 million.

“But I know what my decision will be based on and that will be the point where I feel like I can win. And that will be my decision. If I feel like I can win in DC, I will, and I want people to respect that. You may or may not, but I’m going to work my ass off and I’m going to compete and I want to make this team better. If it’s somewhere else, it’ll be exactly the same commitment.”

The Wizards star appeared in just 40 games last season after undergoing surgery on his wrist in February. Before the season-ending injury, he was averaging 23.2 points, 4.7 rebounds and 6.6 assists per game.

The 6ft 4 guard makes it clear his relationship with the Wizards remains strong and they are in constant discussions. “It’s always about improving the team,” says Beal. “That is our main concern. The commitment is there from everyone. Obviously we fell far short of our expectations last year.

“Winning is hard. Of course you want to be able to fight for a championship, but understanding how hard it is to win puts a lot of things into perspective in terms of your future, where you want to go and who you want to do it with.”

As for his biggest fear, “If I didn’t give myself a chance to win,” says Beal. While “regret” is too strong a word, “You don’t want to look 20 years into the future and think, ‘Damn, I wish.'”

Rooks asks Beal, who spent his entire career with the Wizards after being selected No. 3 in the 2012 NBA draft, if years of losing have affected him personally. She notes that during an appearance on Warriors star Draymond Green’s podcast, he and Beal discussed how “sometimes it feels like money doesn’t matter when you lose because of the words she uses have were: ‘You are unhappy.’ ”

“It has a certain impact, to be honest,” Beal replies. “If my wife were here, she’d be a little more honest because that comes home sometimes … but I try to avoid that. But losing can do that. Yes, making lots of money and we want to make sure our financial future is secure, but you don’t want to get your butt kicked every night, you know? You’re getting tired of it.”

Perhaps Beal would experience less of that misery if he joined the Heat, a team that entered the postseason as the No. 1 in the Eastern Conference and was just a game away from earning their ticket to the NBA Finals. Shams Charania reported in March:

Perhaps Beal would experience less of that misery if he joined the Heat, a team that entered the postseason as the No. 1 in the Eastern Conference and was just a game away from earning their ticket to the NBA Finals. Shams Charania reported in March: