Tony Ferguson challenged by old UFC foe: ‘Give the fans what they want’ 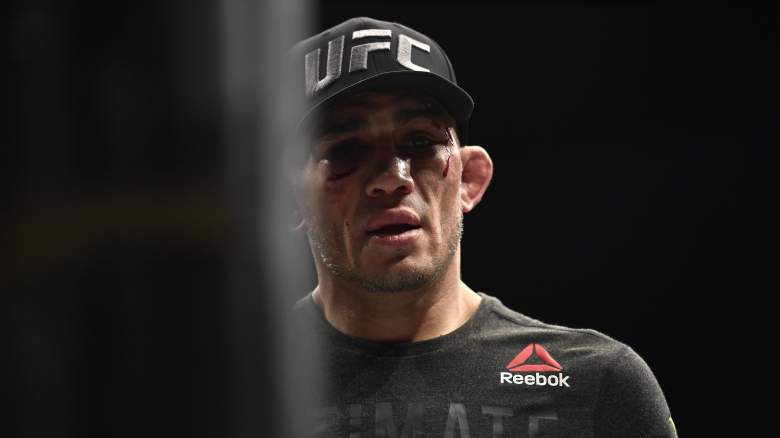 Former UFC interim lightweight champion Tony Ferguson has been called up to a welterweight, or 155lb, contest by Michael Johnson – a man who has a win over him.

“Yo @TonyFergusonXT not sure if you’re still in the big game but if so and you want to go back to 55 I’m giving you a chance to redeem yourself,” Johnson said tweeted on January 13th. “Or we can do it 170!! Let’s give the fans what they want!!!”

The Menace then retweeted a clip of him knocking Ferguson down in the first round of their fight in 2012. See below:

Like Ferguson, Johnson is a longtime UFC veteran who stepped up to the promotion after a stint on The Ultimate Fighter. They fought at lightweight and Johnson prevailed by unanimous decision. Johnson has a professional mixed martial arts record of 21-18 and he boasts wins over Dustin Poirier, Edson Barboza and Gleison Tibau.

The Menace last competed in December when he defeated Marc Diakiese via unanimous decision, improving his last run to 2-1. On the other hand, Ferguson hasn’t had a win in the Octagon since his impressive 12-fight win streak, which spanned from 2013 – his first fight after losing to Johnson – to 2020 when Justin Gaethje defeated him by TKO in the fifth round at UFC249.

Ferguson last competed at UFC 279 when he jumped back to welterweight and fought Nate Diaz. Diaz won via guillotine choke in the fourth round.

Ferguson’s fighting style is unique, to say the least. El Cucuy is a man known for his willingness to give a shot while also implementing a flashy play of unorthodox moves and attacking plans. Well, when Nate’s older brother, Nick Diaz, recently featured in a YouTube video with Dr. Beau Hightower, the former Strikeforce welterweight champion blasted El Cucuy’s fighting style.

“No, I don’t like it,” Diaz said. “It’s disgusting. Yeah I can’t stand that kind of style. I won’t knock it because that’s what you have to do. In general, it’s like a spastic person confused with a lack of technique using this type of tactic. And you have to avoid these tactics and it’s really an annoying guy to fight.

“That’s mixed martial arts for you, though. But just because it’s mixed martial arts doesn’t mean you should rely on these tactics being allowed to execute. If you have a strong base and throw it in, that’s one thing. But often people make up for the lack of their strong technical base with things like what he does.”

Considering his five-fight losing streak and the fact that he was at welterweight in his last fight, Ferguson dropped a spot on the official UFC rankings about a month ago.

But El Cucuy has insisted he’s not done competing and chasing gold. During the UFC 279 post-fight press conference, Ferguson said he will be hosting both welterweight and lightweight games.

Ferguson is 38 years old and has a professional record of 25-8.