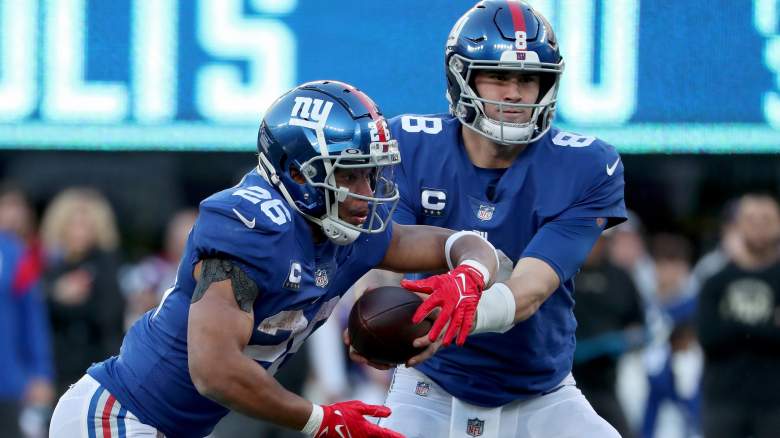 Jones was unwilling to provide clarity on what comes next when questioned by reporters after the Giants’ 38-7 loss at Lincoln Financial Field in the divisional round of the playoffs. If anything, the 25-year-old sounded like he already had the Giants in mind as part of his past, per Pat Leonard of the New York Daily News:

Jones’ reluctance to offer a more upbeat note on staying a giant didn’t go unnoticed. There was nothing definitive, according to the Ian O’Connor of the New York Post:

The Giants rode Jones’ transformation from a quarterback who seemed destined for the exit door to a prolific starter all the way into the postseason. With so much focus on how much he was improving, it became easy to forget the dilemma both Jones and the Giants faced regarding his next move.

Jones’ less-than-transparent statement about his future doesn’t have to mean he’s done as a giant. Not acc Art Stapleton from northjersey.com:

Stapleton’s reference to Barkley is instructive, as the running back’s next contract is one of the top concerns for the Giants. General Manager Joe Schoen may make Barkley the highest-paid player at his position in the NFL, but that would put the No. 26 in a similar group to the San Francisco 49ers’ Christian McCaffrey, who makes $16,015,853 a year over the cap

Giving Barkley that kind of money would make Jones harder to keep. Especially if the Giants want to franchise their QB1, a ploy that’s expected to cost $32,445,000.

According to Spotrac.com, Schoen has the cash, up to $52,506,480. The number will soon dwindle, however, when the Giants bring back Jones and Barkley, who are far from the only key players Schoen has to keep.

Some of the more notable names are listed by ESPN’s Adam Schefter These include Love and prolific wide receivers Darius Slayton and Richie James:

Replacing a competent quarterback is never easy, but Jones will only go as far as his supporting cast will take him. Retaining No. 8 but losing the talent around him would prevent the Giants from making any further progress beyond this season.

The trick is to somehow keep Jones while also expanding the weapons at his disposal.

Jones has exceeded expectations after the Giants turned down his fifth-year option, but the signal caller still needs things to help him get better. Things like a premium wideout or two and better front protection.

These are the things that other quarterbacks who have made big strides have been equipped with, according to the former NFL starter Robert Griffin III. He cited Eagles star Jalen Hurt and Buffalo Bills’ Josh Allen as examples:

A receiver search may not materialize by free rein if the veteran class includes more complementary pass catchers than first class playmakers. The Kansas City Chiefs’ Juju Smith-Schuster and the New England Patriots’ Jakobi Meyers would be the kind of possession goals Jones has successfully thrown this season, but the Giants are better served using the 2023 NFL draft to to find a real field stretcher.

Finding a legitimate outside playmaker is only part of the puzzle. The Giants also need to strengthen an offensive line that gave up five sacks in Philadelphia.

Ultimately, the Giants’ priorities this offseason will come down to whether they believe they need Jones to win. Or when head coach Brian Daboll and offensive coordinator Mike Kafka think they can work the same kind of magic for another quarterback they turned Jones with this season.

Ultimately, the Giants’ priorities this offseason will come down to whether they believe they need Jones to win. Or when head coach Brian Daboll and offensive coordinator Mike Kafka think they can work the same kind of magic for another quarterback they turned Jones with this season.