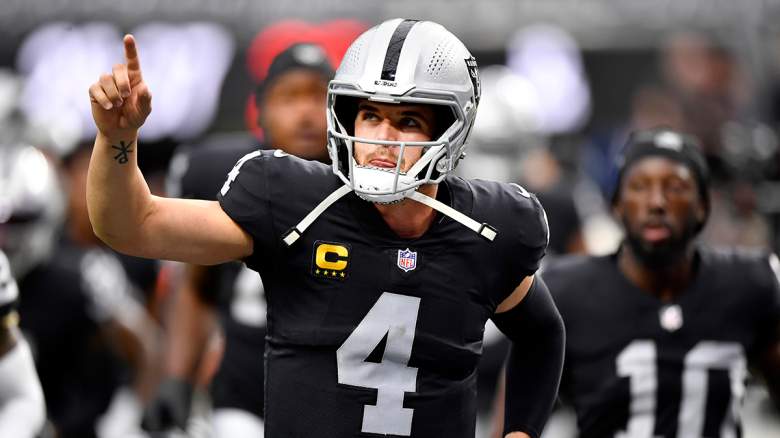 The Las Vegas Raiders are currently reviewing trade options for Derek Carr and the clock is already ticking. It’s less than a month until Feb. 15 comes and $40.4 million in contract guarantees for the quarterback kick in. Trading Carr will prove difficult as he has a no trade clause in his contract and cannot legally be traded until the new league year begins on March 15th.

If the Raiders find a trading partner that Carr is okay with, it has to be a team that general manager Dave Ziegler trusts not to walk away from the deal between February 15 and March 15. The team that makes the most sense is the Houston Texans. ESPN’s Jeremy Fowler explained why Houston makes sense and one AFC coach predicts it will happen:

The coach explained why Carr is a good fit with the Texans.

“Nick will be looking for a characterful quarterback. That will be important to him,” the coach told Fowler. “Derek fits that mold.”

Carr has spoken fondly of the Texans in the past and even hoped to be drafted there in 2014. Although his brother didn’t have a great career there, the organization treated him well. However, Carr wants to achieve a stable situation and fight for the Super Bowls.

The Texans are on the verge of hiring their fourth head coach in four years and had the league’s second-worst record in 2022. The only thing attractive about Houston is that Carr could return to Texas, where he lived briefly while his brother played for the Texans. There aren’t many teams further from Super Bowl competition than Houston. It’s hard to imagine Carr giving up his no-trade clause to play for the Texans.

The Raiders still face an uphill battle when it comes to trading Carr. The quarterback has little incentive to help the team out in this situation. He could easily tell Las Vegas that they must either pay him or cut him and turn down all trade offers. Still, the Raiders hope they can act.

ESPN’s Adam Schefter reported On a January 21 episode of ESPN’s Postseason NFL Countdown, this team expects to be able to trade him. It’s possible that Carr is playing nice with the Raiders behind the scenes. While he’ll likely still land a big contract if he becomes a free agent, he’s paying well on his current contract and he might not want to risk losing it. Regardless, the Raiders will do whatever it takes to convince him and a team that a trade is the best course of action. This will not be an easy task.