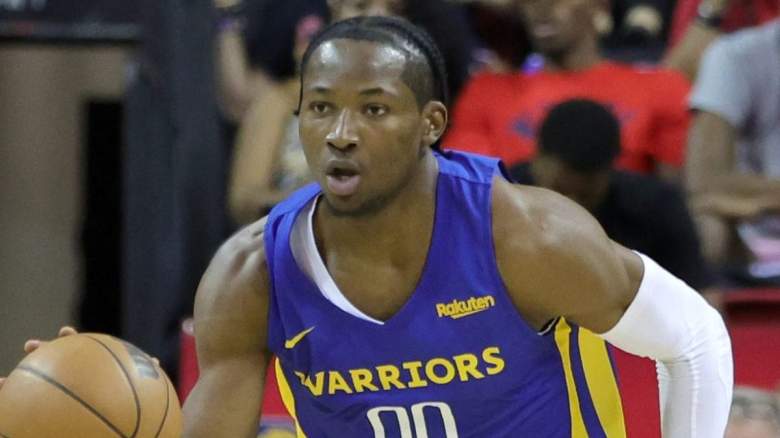 It’s been a relatively quiet offseason for the Golden State Warriors. Talks of future contract extensions have dominated the headlines but basically everything was pretty much business as usual. You’re going to focus on one thing for the next year – defending your title.

The off-season additions of Donte DiVincenzo and JaMychal Green have perfectly offset the losses of Otto Porter Jr, Gary Payton II and Nemanja Bjelica and their youngsters should be poised to step up to bigger roles. However, a young player got caught up in drama earlier this summer.

ESPN’s Stephen A. Smith questioned Kuminga’s commitment and focus. However, during a recent appearance on The TK Show Joining The Athletic’s Tim Kawakami, Warriors head coach Steve Kerr refuted those claims, saying that he and GM Bob Myers were confused by them.

“I know that weird report came out, I think Stephen A. Smith said something about JK, and honestly Bob [Myers] and I, when that came out, called each other and was like, ‘Where is this coming from?’” Kerr explained. “Because it didn’t make sense because JK was great, he did everything we asked of him, he worked hard, I enjoy coaching him. He’s exactly where he needs to be and he needs to get better every day. But we are very happy with his summer and everything he is committed to.”

The ESPN host’s coverage came on an episode of First takewhere he reported that Kuminga wasn’t fully focused on the Warriors.

Kuminga didn’t earn much playing time during his rookie season, being stuck behind the likes of Draymond Green and Poter Jr. in the rotation. Speaking about the team’s young players, Smith expressed some concerns about Kuminga.

“I expect [Moses] Moody and [James] Wiseman significant. I’m worried about Kuminga. I hear too many things about him off the pitch in terms of his head. The level of discipline he lacks. You understand? Part of the stupidity” said Smith.

And despite claiming to be a Kuminga fan, Smith told him to pull himself together.

“I don’t get involved in his personal affairs; I say nothing of the sort. I’m talking attitude, I’m not talking action. I say that attitude, that level of focus, commitment, determination to just put your head down – get the job done. I hear he’s cheating on the Warriors in that regard and he needs to pull himself together because I’m a fan of Jonathan Kuminga.” Smith explained.

After these allegations became known, Andrew Iguodala came to his defence.

Kerr wasn’t the only person defending Kuminga. In an episode of his podcast point forwardIguodala said Smith’s comments were unjustified.

“My young fella, I’m upside down,” Iguodala said on the Point Forward podcast. “He took some leaks from Stephen A. I don’t know how justified they were because from what I’ve heard he did what he was supposed to do this summer.”

As the Warriors prepare for next year, the team seems confident that Kuminga can play his part, regardless of Smith’s claims.

‘The Walking Dead’ season 11 on AMC: What day and time will the final four episodes air? And everything you need to know

‘The Walking Dead’ season 11 on AMC: What day and time will the final four episodes air? And everything you need to know