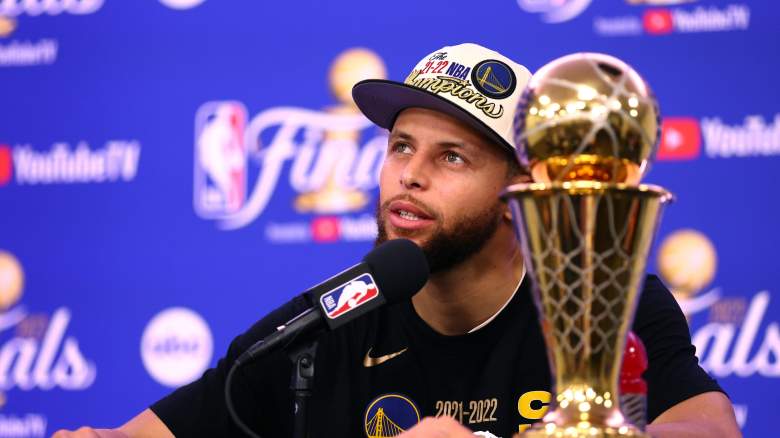 Stephen Curry and Kevin Durant are widely regarded as one of the greatest duos to ever play in the NBA. In the three seasons that the two stars played with the Golden State Warriors, they made three straight NBA Finals appearances and won two championships. Durant was the most valuable player in the finals for both titles.

Durant left the Warriors in 2019 to join the Brooklyn Nets in hopes of building his legacy off the Bay. For those who are late to the party, Durant had not won a ring before joining the Warriors. And his decision to join the franchise was controversial after his Oklahoma City Thunder blew a 3-1 lead just weeks before joining Golden State in the Western Conference Finals.

But Durant’s attempt to build his legacy in Brooklyn has so far failed. And after failing to make it past the second round of the playoffs in three seasons, the 12-time All-Star has requested a trade. On ESPN’s June 11 edition of “Get Up!” NBA insider Brian Windhorst said that despite an unsavory departure from the franchise in 2019, Curry was open to reuniting with his former All-Star teammate.

“I think that says a lot about the Warriors organization – that they would get a championship behind them and Steph Curry would have a crowning moment in his career and he wouldn’t slam the door on that.” said Windhorst.”Steph Curry has the kind of clout he could end this with, but he’s not, and [Warriors owner] Joe Lacob is not.”

Curry isn’t the only Warriors star open to a revival with Durant. According to The Athletic’s Marcus Thompson II, Klay Thompson and Draymond Green are also on board. As the defending NBA champions, they are content with the challenge of fighting back with the roster they now have. However, if the opportunity presents itself, the Warriors stars would be reluctant to turn it down.

“This is not a case of the Warriors stars pressuring the front office to take on Durant. Sources made it clear they are doing well defending their title with Wiggins, Poole and the young players they have nurtured to win with them. But if the universe somehow arranges for the legends to reunite, they would be open to it,” writes Thompson.

“The talent of the Curry-Durant-Green-Thompson Quartet was never in question. How the run ended is the source of the uncertainty. But the mood of their talks this offseason suggests they could be clicking again.

It should come as no surprise that the Warriors stars are open to a reunion with their former star teammate. After all, they were arguably one of the most dominant teams in NBA history. And if it weren’t for a series of catastrophic injuries in 2019, they could have been the first team to score three times since the Kobe and Shaq Los Angeles Lakers of 2000-2002. With Durant entering the first year of a 4-year maximum $198 million extension, they could take a second shot at making history.

However, the question remains how open Durant would be to reuniting with his former teammates. After an unceremonious exit from the franchise and a failed experiment with the Nets, joining the Warriors, a season that’s been shy of a fourth title since 2015 would actually add to the narrative that he wasn’t winning outside of the Warriors system can. It will be interesting to see if there will be a reunion.