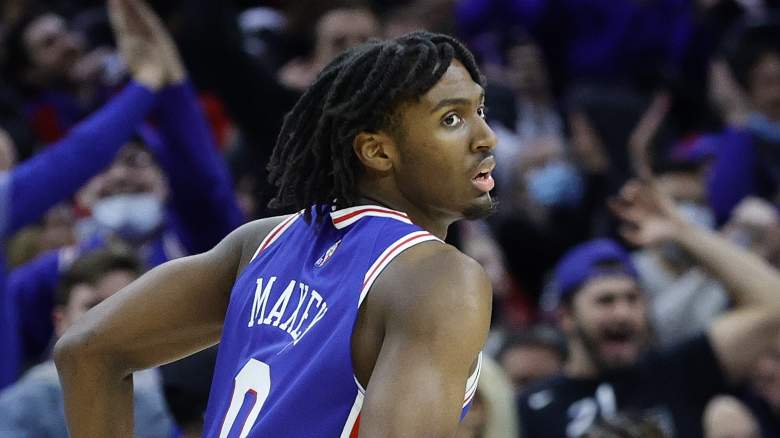 Tyrese Maxey is the hero that Philadelphia deserves and needs right now. The 21-year-old star guard morphed from a sparkplug off the bench last season to a clutch-time scorer in the guts of the game this year. His transformation has been remarkable since entering the Sixers’ starting five.

Yes, what the young kid from Texas is doing is incredible. And Sixers fans are eating it up, including a repost of an emotional video from the 2020 draft. It’s hard to believe 20 other teams passed on Maxey who went one spot after Precious Achiuwa.

But the fresh-faced Kentucky guard came into the league with little fanfare, armed with only determination and grit. Maxey had been training with two-time champion Rajon Rondo prior to the draft, a person he has credited multiple times for his development.

Maxey, choked up with tears, also thanked the Sixers’ organization on draft day and promised not to let them down. He certainly has fulfilled his end of the bargain.

“I learned so much from Rondo, I really appreciate him, man. He took the time out of his day, every single morning to teach me the tricks of the trade, and I want to say thank you so much,” Maxey said. “And I just want to thank Philadelphia for this opportunity and I promise you it won’t be a regret.

The latest Sixers news straight to your inbox! Join the Heavy on Sixers newsletter here!

Kendrick Perkins has been ringing the bell hard for Philly throughout the season. He is a former teammate of James Harden and the first person to really confirm that Harden wanted out of Brooklyn to team up with Joel Embiid.

Perkins has shown his support for the Sixers by penciling in Embiid for MVP, too. Now the one-time NBA champion is showering Tyrese Maxey with love. How did all those general managers miss?

So Perkins wrote: “The 76ers officially have a Big 3!!! Tyrese Maxey is ELITE and I see why Philly didn’t want to include him in any trade! Carry the hell on.”

Doc Rivers would often challenge Maxey through the media early in the season. He wanted him to be more aggressive on offense, to attack the rim instead of falling back and passing to perimeter players. The Sixers coach was trying to prove a point: when Maxey penetrates, it forces the defense to collapse which opens up other guys. Good things tend to happen in that outcome.

Well, that lesson was learned. It’s worth its weight in gold now that Harden has entered the mix. Their two man game has been unstoppable in the playoffs.

“It’s tough. You’ve got two guards. Either I’m coming off or he’s [James Harden] coming off,” Maxey said after Game 2. “You’ve got to make a decision. Do you want to switch? Most of the time they don’t want to get off James’ body and give him any space. If they don’t, I’m getting downhill. If they switch, then he has a matchup or I have a matchup. We just try to get downhill and make plays for ourselves and make plays for others as well.”

Three charts showing the looming economic turmoil in the UK

Three charts showing the looming economic turmoil in the UK