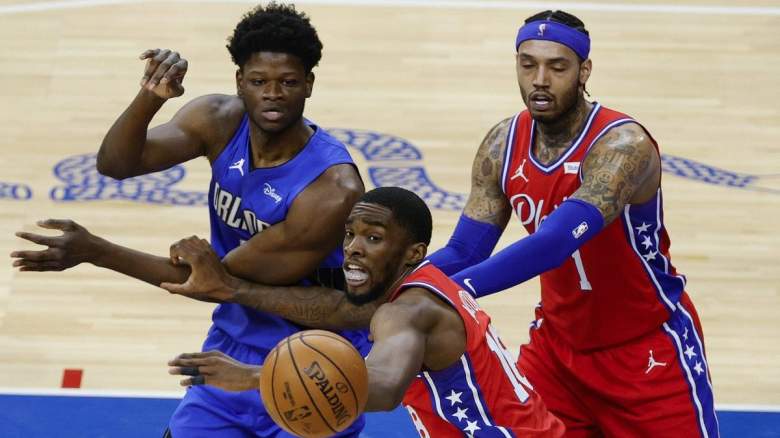 Shake Milton is one of the quieter personalities on the Philadelphia 76ers roster. The four-year veteran has spent his entire career with the Sixers but is never one to make the headlines. Milton has provided solid bench minutes for Philadelphia and hopes to maintain that role going forward. He recently joined the Talk of the Town 918 podcast where he had the opportunity to outline his journey into the NBA and his experiences with the Sixers. Discussing his professional transition, he thanked former Sixers fan favorite Mike Scott for helping to ease the difficult jump. When asked if there was a veteran who took him under his wing, Milton replied:

The clip from the podcast can also be seen here:

Mike Scott first joined the Sixers as part of the trade with Tobias Harris as the franchise progressed from the dark days of The Process to the win-now team it is today. Scott had one of the best stretches of his career in the 29 games he played with the Sixers in the 2018-19 season. He hit 41.2% of his three-point attempts and successfully filled the role of the team’s enforcer. Scott also played a valuable role in the Sixers playoff rotation. He even hit that good three-pointer to take a 3-1 lead over the nets in the 2018-19 playoffs.

In total, he spent three seasons in Philadelphia, with his role on the court becoming smaller and smaller. His influence was felt well beyond the pitch, which Milton mentioned in the interview as he was one of the most active players in the community. Scott had many memorable moments, including a nerf war with kids in Philly and a fight at an Eagles tailgate. He has not played in the NBA since the 2020-21 season when he last played with the Sixers.

While there’s a lot of excitement surrounding the Sixers’ signings, any man is also a threat for the minutes normally allotted to Milton. It has been a career of ups and downs for the SMU product so far.

He’s shown some truly intriguing flashes, like the 39-point breakout against the Clippers in 2019-20, but he hasn’t consistently put the pieces together. Milton had his best 2020-21 season when he averaged 13.0 points, 3.1 assists and 2.3 rebounds per game. Unfortunately, his points and assists totals fell to 8.2 points and 2.5 assists per game last season, and he’ll be looking to improve in the future.

There are plenty of new faces making their statements as to why they belong in the Sixers rotation, but Milton shouldn’t be counted out entirely. It’s great to see him reflect on his journey and commend Mike Scott for the impact he’s brought to the team outside of court. His focus will now shift purely to basketball as the Sixers training camp is scheduled to begin on Tuesday.

Watch: Deer rescued from mesh hammock in the Florida Keys

Watch: Deer rescued from mesh hammock in the Florida Keys