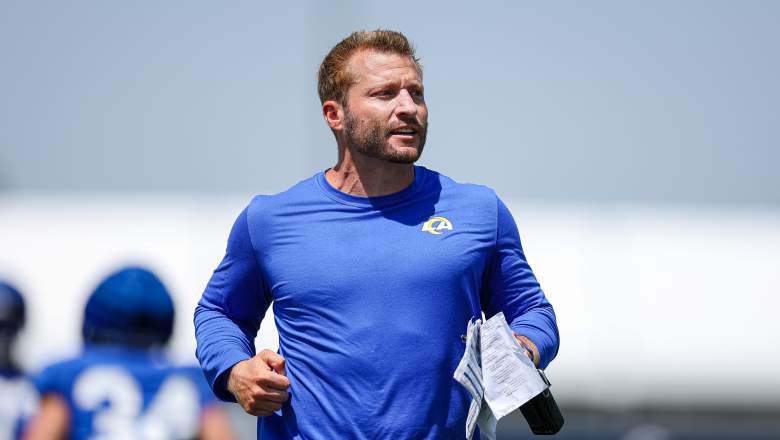 Sean McVay had mixed feelings watching his Los Angeles Rams practice on “Back Together Saturday” on July 30 — in a way that nonetheless left the head coach positive and optimistic. All the more he recalled what a former Rams legend had once told him, which he shared after the session.

How did that drill play out that got the sixth-year head coach thinking about what a Rams legend told him?

McVay saw the offense overpower the defense: One with Allen Robinson catching a grab in the red zone while sandwiched between two defenders, and another involving Cooper Kupp who took the high point sideline catch case brought. However, the head coach saw batted passes and defense crowding the quarterbacks on some of the 11-on-11 drills.

As an offensive genius, McVay can often get frustrated watching the defense get the better end of a McVay-led attack. At the same time, McVay’s emotions can sometimes be overwhelmed when he watches his defense give up big plays like “A-Rob” and “Coop” at Crawford Field.

But McVay was still stoic and content with the energy on display on the UC Irvine campus. Not only did the Rams react the way he envisioned, but he was also reminded of the former Rams legend’s advice … which McVay shared with the media, including Heavy.

That expletive motivation came from the mouth and wisdom of the first Rams coach to win a Super Bowl.

“Dick Vermeil told me that a long time ago, when you realized that being a head coach means you deal with a lot of shit anyway,” McVay joked, drawing laughter from the LA media. “Coach Vermeil is the best.”

Overall, however, McVay said Saturday’s session witnessed a Rams team that brought strong energy and enthusiasm as they faced the “Rams House” crowd that filled seats at UCI.

“You did a good job,” McVay continued. “They came back ready to go. Our boys always react correctly. There will always be things that naturally annoy you as a head coach when you challenge each other positively. But that’s because of the trust I have in these guys.”

Along with the coaching joke from the winning Super Bowl 34 head coach, McVay also shared another humorous take on coaching how he deals with errors on offense and defense.

But Back Together Saturday saw McVay’s team make strides forward.

“But you know what, it was better. It was a step in the right direction. You always want to be able to see that,” McVay said.

Van Jefferson was not seen in full pads on the 80-degree day on the UCI’s grass football pitch.

However, McVay said the Rams are “figuring out” why Jefferson had some inability to practice and declined to give details of what his absence entailed. A follow-up question was whether Jefferson’s knee, which bothered him towards the end of last season, was the reason the wideout didn’t run stretches with his team in his third year.

“I’ll have more information for you later,” McVay said. “Like I said, I don’t have anything right now.”

Sophomore wideouts Ben Skowronek and Tutu Atwell were seen in Jefferson’s absence as they received some first-team representatives.

“I’ll have more information for you later,” McVay said. “Like I said, I don’t have anything right now.”