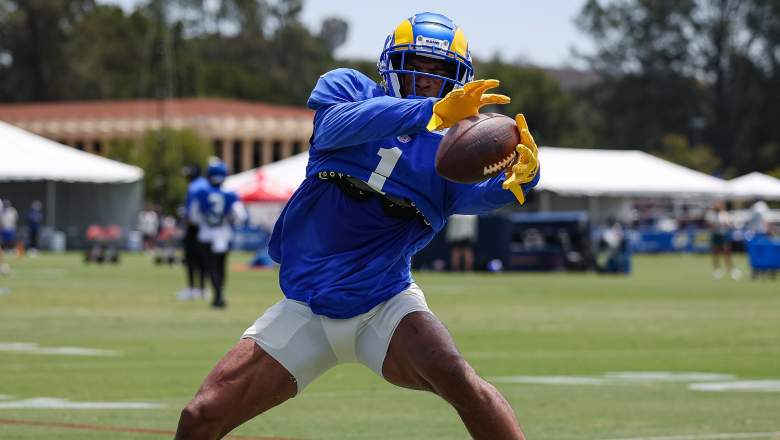 For the first time since Sean McVay took over as head coach of the Los Angeles Rams, Robert Woods is not on the list at Rams training camp.

Woods, also known as “Bobby Trees,” was the popular local star of both Serra High in nearby Gardena (where a coach held Saturday, July 30 practice at UC Irvine) and USC. He was also part of the foundation McVay co-founded that ultimately led other Rams, including a future third-round pick named Cooper Kupp, to follow Woods’ lead.

Woods was not only known for his crisp routes, but also for dealing with highly concentrated grabs. Aside from route patterns and catches, Woods was a valuable presence in the dressing room, not only providing vocal motivation but showing a technical aspect on the field that carried over to the younger Rams.

But now Allen Robinson has stepped into the picture for this camp – with the intention of becoming a bigger, more physical option.

But are there qualities that make “A-Rob” comparable to the former Rams No. 2? More than that, does A-Rob already fill the “void” left by Woods?

Robinson was clearly signed to give the Rams a more physical upgrade on an offense looking to improve their performance in the hard-fought Grabs category and to become the second option for the league leader in all three main receiving categories last season at Kupp.

But has A-Rob already filled the void left by Bobby Trees?

“Robert was such a stud,” McVay began answering that question after Saturday’s session. “He was such a fundamental part of what we were able to do from ’17 through last year. I am forever grateful for the time I had with Robert and as a competitor he is as good as it gets.”

But: “Allen is a great player. They’re very different, but they’re both great football players in their own right. I think Allen and Cooper flow into each other in a positive way.”

It took Robinson just two games to deliver the first raging cheer from the “Rams House” that filled UC Irvine’s Crawford Field on “Back Together Saturday.”

first: A diving shovel where “A-Rob” had to stretch to the sidelines. The second? A touchdown in the red zone with two DBs pinching Robinson. But games like this speak to what the Rams have come to expect from the former Chicago Bear and Jacksonville Jaguar: contested grabs. However, McVay said Robinson is a skilled route runner aside from doing those highly focused grabs.

“You know he can do a lot of different types of routes down there,” McVay said. “You saw Matthew (Stafford) did a great job working through a progression. And a big, strong and physical guy that works (is there) at the back of the end zone. They talk about a big catch radius that doesn’t even feel like it has to leave the ground or be right around that goalpost and those aggressive hands. Anything you want to do as a receiver with your body control and the ability to create separation and be aggressive against the football, that’s Allen.”

If there’s anything Robinson picked up on, it’s his role modeling…a similar trait that Woods adored in “Rams House.” McVay begins to see the younger field workers learn from Robinson’s work ethic.

“I think so. I think there’s a natural respect that comes from his performance and experience in his league, whether he was his freshman year with the Rams or if you look at the experience he’s had with Jacksonville and Chicago. But Allen, in many cases I think our best leaders do better than anything they have to say,” McVay said.

In other words, as McVay put it, “I see better than I hear. And I think the way he handles his daily rhythm and process shows the leadership we’re looking for. I definitely see him really communicating with a lot of these younger guys and that’s what we want.”