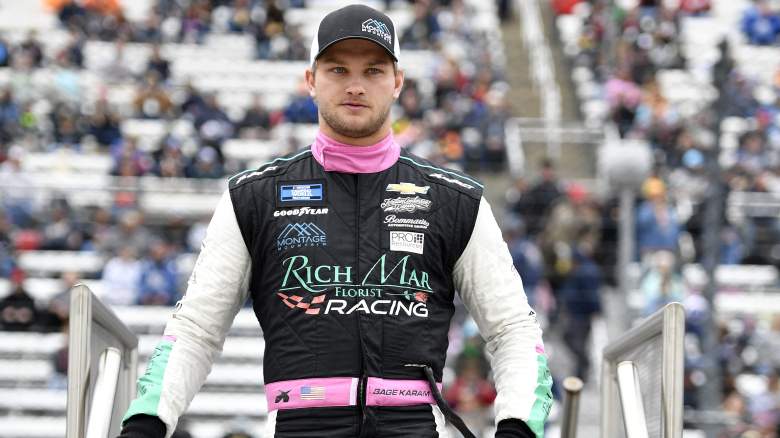 Sage Karam has a very busy year 2022 in its sights. The driver with starts in NASCAR, IndyCar, Nitro Rallycross Next and other series wants to remove the “part-time” from his job description. His goal is to run full-time in either the Xfinity or Truck series while adding races from other series.

Karam met up with Heavy during the Nitro Rallycross weekend at Wild Horse Pass Motorsports Park in Phoenix, Arizona. He primarily spoke of his continued growth on dirt tracks and his appreciation for Travis Pastrana’s purpose-built tracks, but he also expressed hope that he will continue to make launches in NASCAR after making five in 2021.

“This was my first year dipping my toes in the water and the whole world of stock cars,” Karam told Heavy. “I really enjoyed it. And it was something I didn’t know what to expect, but I enjoyed it a lot. I learned a lot and in some of these races I did better than I thought, and that led to some confidence going into the offseason, like, ‘Hey, maybe I could do this full time more capacity.’ So I would love to do full-time races in XFINITY or even NASCAR trucks. “

Born in Pennsylvania, he made his debut in stock car racing in the 2021 season. He started four races during the NASCAR Xfinity Series season and one more in the NASCAR Camping World Truck Series.

Karam made his debut on August 14th on the Indianapolis Motor Speedway Road Course. He joined Jordan Anderson Racing, a first-year team with rotating drivers, and qualified for 18th place overall. He was unable to finish the race due to electrical issues while several other riders crashed.

Karam returned to Jordan Anderson Racing for races at Bristol Motor Speedway, Charlotte Roval and Phoenix Raceway, scoring 16th overall as the best result. He also made his debut in the Truck Series at Martinsville Speedway, the final playoff elimination race.

While one goal for Karam is to adopt a full-time NASCAR schedule, he has other series in his sights as well. Specifically, he wants to join Dreyer & Reinbold Racing for another Indy 500 start. He’s been working with the team every year since 2016 and wants to continue this trend.

“I want to be back at the DRR for the Indy 500 next year, which I think is a great opportunity,” said Karam. “The team has shown interest in my continuing to do rally stuff in the future, that would be fun because I’m excited to see where it is [Nitro Rallycross Next] will and how it will grow. In the next few years you will see electric cars and everything else here. “

Karam has only competed in three runs of the first season of NRX Next, but he has won two races. Continuing to participate in this special series will only help him grow as a driver and it will help him achieve his ultimate goal of just racing as much as possible.

“Like I said, I have a lot of fun,” added Karam. It’s fun, but it’s also learning, and it’s just sitting down and keeping everything sharp. For me, the more I can drive, the better. If I can, I’ll race, I’ll drive stock cars, I’ll drive indy cars, I’ll drive lawn mowers. I don’t care as long as I’m driving something. “