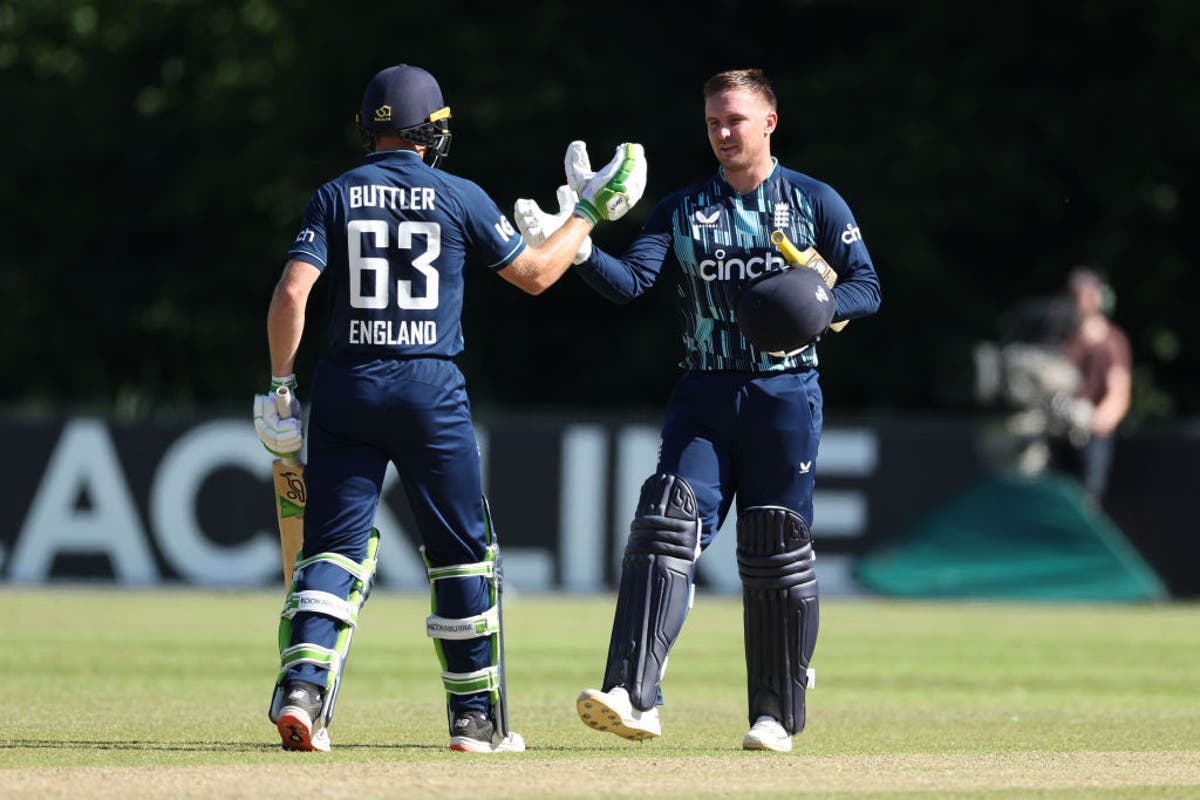 David Willey took four for 36 as the Netherlands went down for 244 in 49.2 overs after substitute captain Buttler won the toss, with Morgan withdrawing as a precaution because of a tight groin.

He was therefore denied a chance to end a string of consecutive ducks, his drought being in the form of a subplot in that series, but was hardly missed as Buttler and Roy led England to an eight-wicket win.

Phil Salt provided the initial momentum with some crisp shots in his 49 from 30 balls and although he and Dawid Malan were run over in the same Paul van Meekeren there were no further alarms.

Roy was dropped to 50 and 75 before rising to his 10th ODI ton and finishing unbeaten with 101, while Buttler hit five sixes, one after a double impact from Van Meekeren, in his 86 not out of 64 deliveries in a straight 163-run partnership as England sealed a run with 19.5 overs left.

England’s bowlers largely stuck to their task as the Dutch imploded from 203 for three overs from 39.5, although unfortunately David Payne finished only 9-1-38-1 on his international debut after beating left-back Reece Topley Sam Curran had replaced Morgan in the restored XI.

Willey made it three of three against Vikramjit Singh, who targeted a half-hearted move for the second time in two innings, which was bagged by Malan, who dived forward, while Payne should have been in the wickets after hitting Tom Cooper with a bumper had surprised.

Liam Livingstone, having had ample time to settle under a looping chance in midwicket, seemed distracted by the sun and gave up the catch, the ball bouncing safely a few yards from him.

Livingstone atoned for his faux pas with a slip catcher at the deep square-leg boundary to see Cooper hit an enterprising 33 of 37 balls before falling to the nimble Brydon Carse.

Max O’Dowd launched a carefully engineered half-century after 68 deliveries, but died on the next ball after feathering Buttler following Livingstone’s leg spin before Bas de Leede and Scott Edwards opted for a watchful accumulation, with borders held high in the middle stages.

The game plan of holding wickets for the back end backfired when De Leede’s ill-considered hook on 56 from Carse marked the start of a Dutch meltdown in which they lost seven for 41 in 9.3 overs. Willey took three cheap wickets while Payne deservedly got into action when Edwards was dressed for 64-mid.

Roy cut and pulled with aplomb early in England’s pursuit of back-to-back fours, but it was Salt who stepped on the gas. An authoritarian drive and Heve included streakier efforts that could have found outfield hands but gave Logan van Beek the opener with four fours in an over.

He was dismissed just short of a third straight 50-plus result after his stump was knocked back, while two balls later Malan appeared out of position and was thrown around his legs.

However, with 85 to two at the end of the power play, England still sat in the box seat and Buttler knocked down Van Meekeren twice, albeit somewhat unconvincingly, in fours before thundering a first six against Aryan Dutt who had been seen moments earlier Roy landed behind the stumps after passing a fifty.

The returning Fred Klaasen brought Roy to a leading edge after a cutter, but the left arm spilled a return catch and the England opener later batted another four – making 15 total – home in the over.

There were doubts Roy would get a chance to hit three figures as Buttler wowed the crowd with a clean shot at Van Meekeren, whose attempted slower ball bounced twice with the back of his hand.

Buttler refused to take pity on the bowler and sent him to the stands before doing the same with the free hit.

Roy’s three fours in an over-off from De Leede took him to three numbers in his 101st ODI before Buttler ended things in scintillating fashion, hammering Tim Pringle via long-on to take 248 alongside Salt as the top run-scorer of the to appear in series.