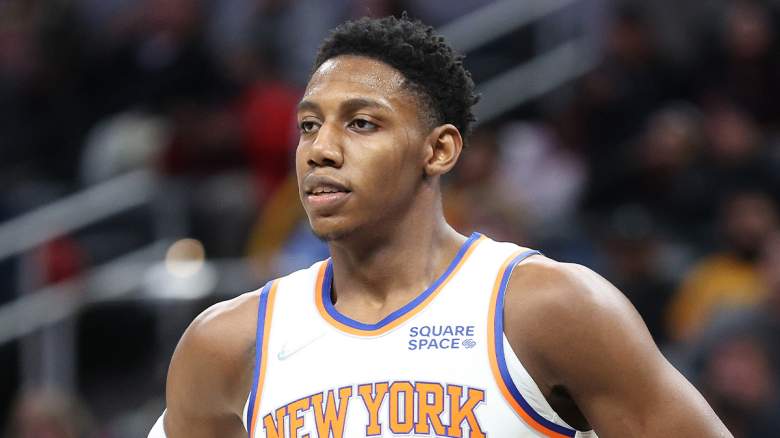 The New York Knicks are entering the season without the services of Donovan Mitchell after the Utah Jazz traded the Star Guard to the Cleveland Cavaliers.

During those trade talks, RJ Barrett was a player who came up often, but the Knicks eventually decided to hold on to him and sign him for a contract extension.

Barrett will be a big part of the Knicks’ success going forward, and the team is hoping he can make an All-Star leap this season by following in the footsteps of Zion Williamson and Ja Morant, the two players who were drafted before him.

The Knicks forward will have the help of Jalen Brunson this year, so there will be a real point guard running the show instead of a committee chaired by Kemba Walker and Alec Burks.

In an interview with KnicksFanTV, Barrett revealed that former All-Star Allan Houston worked with him.

At 26:26, Barrett goes into detail about how Houston was close to him and helped him.

“Well, you know, Allan Houston, he works for the Knicks, so I see him every day and talk to him all the time,” Barrett said. “He was really a person who dealt with these things and was a great player for the Knicks, so he helped me a lot.”

Houston was a staple of the Knicks in the mid-’90s to early 2000s, so he’s got a taste of what it’s like for the team to be good and bad. Though the team fell off in the new millennium, Houston was a fixture for them and he put up some of his best numbers despite the team struggling.

At 6-foot-6, Houston and Barrett have similar physiques, so the former Knicks All-Star has some advice for the youngster. Barrett has improved every season he’s been in the league, so it’s clear something has worked for him.

If the Knicks are to find themselves back in the playoffs, they need Barrett to make another leap. He averaged 20 points per game last season, and even that wasn’t enough to propel the team into the playoffs.

In addition to Barrett, the Knicks need a return to form from Julius Randle, who was an All-Star and All-NBA team member two seasons ago. If Barrett and Randle can make improvements and Brunson continues to show the potential he showed with the Mavericks last season, this team should be solid.

The bench will also be something to watch as they will see the return of a healthy Derrick Rose to go along with the developing youngster. Obi Toppin, Immanuel Quickley and Isaiah Hartenstein are all solid figures who could give the Knicks a few wins.

While there’s no superstar on the list, the Knicks have a big list, led by Barrett, so at least a play-in spot shouldn’t be ruled out.