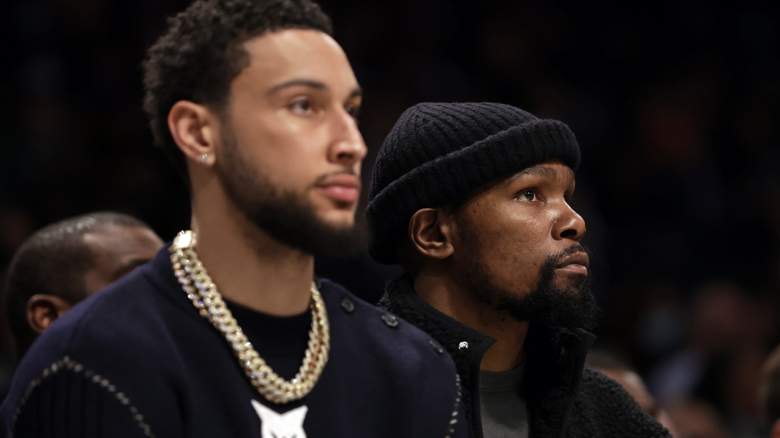 Although All-Star shooting guard James Harden had to be replaced midway through last season, most fans were receptive to All-Star forward Ben Simmons’ move to the Brooklyn Nets. Simmons is a three-time All-Star at just 25 and was a finalist for the 2021 NBA Defensive Player of the Year award. Good as Harden is, he had skills already provided by Kevin Durant and Kyrie Irving. But Simmons could help fill a gaping void the Nets have with his defense, size and elite playmaking.

But as of yet, Simmons has yet to make his Nets debut. A back injury held him back in 2022 and eventually required off-season surgery. Although he expects to make a full recovery when next season begins in October, it will be 15 months since his last NBA game. The Nets are playing a dangerous game by pinning so much hope on Simmons, but a rival manager says Brooklyn really have no choice.

“I don’t think they want to trade him at this point because they need him to get back on the floor, play well to get his trade value back up,” the rival manager told Heavy’s Sean Deveney. “It’s obviously very low at this point. They have their other issues with Kyrie and Kevin Durant, they take precedence now.”

With Kyrie and KD’s futures in Brooklyn uncertain, as well as Simmons’ health, the Nets enter dangerous territory with their future at stake.

And although the rival executive assures the Nets would be better off keeping Simmons in the roster at this point, they are in the midst of a near-unprecedented situation. And when the right deal for their newly acquired star comes along, they have no choice but to at least consider it.

“But they would have to listen to the right offer,” added the managing director. “They don’t want to fully commit to a rebuild that isn’t the intention from the talks they’ve had. But if they can get talent and young fortune on the front lines, they would have to consider it.”

Things moved quickly for the Nets last season, leading to Harden demanding a trade that sent him to the Philadelphia 76ers and Simmons to Brooklyn. Many believed the reason for Harden’s request was the absence of Kyrie Irving, who refused to take the COVID vaccine. But Bally Sports’ Brandon “Scoop B” Robinson says Harden wants out because of Nash.

“There are a few things you could do because I think the James Harden issue for Sean Marks was a Steve Nash issue, not a Kyrie issue as was widely reported,” Robinson told Sirius XM Radio Rick Kamla and Antonio Daniels on July 13.

The future of the Nets still hangs in the balance. It will be interesting to see what the squad will look like at the start of the season.

BACK OF THE NET Sky Sports Deal saves you £108 a year on an incredible summer deal – How to get it* Clicking a...

BACK OF THE NET Sky Sports Deal saves you £108 a year on an incredible summer deal – How to get it* Clicking a...