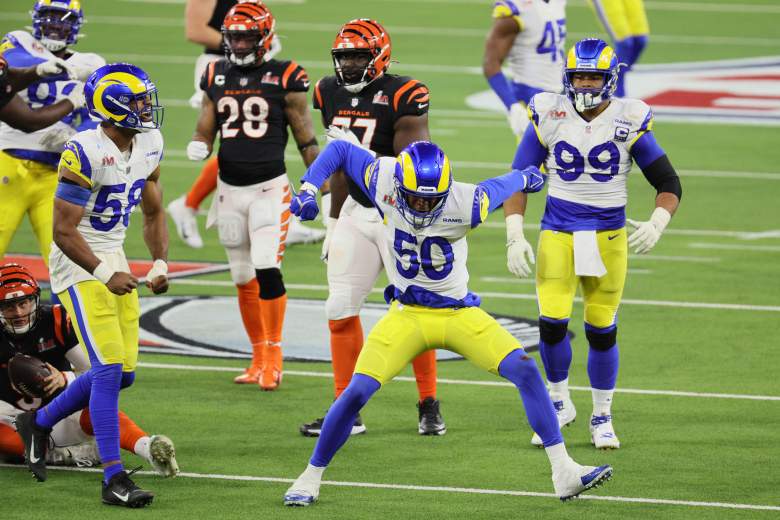 The Los Angeles Rams’ big offseason signing wowed one of their younger stars.

Eight-time All-Pro linebacker Bobby Wagner joined the Rams on a pricey five-year deal this offseason, pairing him with Ernest Jones alongside other linebackers in Los Angeles.

In a profile post about Jones, written by The Athletic’s Jourdan Rodrigue, the younger inside linebacker shared the influence Wagner had on him before they even played a game together.

After an impressive rookie season in which Jones had 61 combined tackles and two interceptions, Jones needs to make room for another inside linebacker in the Rams’ Wagner.

When Jones got wind that the Rams might sign Wagner after his release from the Seahawks, Jones pushed for the Rams to sign him, telling Rodrigue that Wagner was — and still is — his favorite player.

“When he came to visit (pre-booking), I got a call and I was like, ‘Let’s get him. Let’s do what we have to do and bring him over here to help us win again,'” Jones told Rodrigue.

There aren’t many better inside linebackers in recent history than Wagner. He was named a first-team All-Pro in six of his ten seasons in the league. He has twice led the league in tackles (2016 and 2019). He was also a key piece in the Seahawks’ historic defense, which won the Super Bowl in 2013 and returned there in 2014.

Still playing at the highest level, Wagner recorded a career-high 170 combined tackles last season. Jones looks forward to seeing Wagner in the front row, telling Rodrigue that Wagner “will be tired of me before it’s all said and done.”

“He was in the room every day just watching him, it was amazing. It’s been the highlight of my career so far,” Jones told Rodrigue. “(I) am learning from someone who’s done everything I aspire to: Pro Bowls, All-Pros, Super Bowls. He’s everything I want to be and more.

“Man, he’s great. Just being able to watch him work. … We sit there and talk about football all the time, but I visualize more and observe what he does throughout the day. Watch his posture. Watch his feet. Watch his hands, how his body moves. I’m just trying to perfect my craft and be one of the greats like he is.”

Obviously, the Rams offered something that made Wagner want to return to his native Los Angeles. They gave him a five-year, $65 million contract with a $20 million guarantee, giving Wagner an opportunity to help the Rams become the first consecutive Super Bowl champion in nearly 20 years .

But Wagner is also looking forward to mentoring 22-year-old Jones, who will be 10 years younger than Wagner when the veteran turns 32 on June 27.

“He has all the qualities of a great linebacker. If there’s anything I can do to help, I will,” Wagner told Rodrigue. “I think he’s a very special player and he has a chance to be really, really good.”

In the profile, Rodrigue notes that Wagner’s football IQ and how he works on the open field were studied by the Rams ahead of the 2021 NFL draft to create Jones’ scoring profile. Of course, the Rams liked what they saw in their review of the South Carolina product. The Rams selected Jones late in the third round of the 2021 NFL Draft.

While Jones was the Rams’ second pick in the 2021 draft, he didn’t get much playing time right away. Jones only played 45 defensive snaps in the first seven games of the season.

However, Kenny Young’s Los Angeles to Denver trade gave Jones an opportunity to start in Week 8 and he thrived from that point. He recorded nine combined tackles, a half sack and an interception in the Rams’ 38-22 Week 8 win over the Texans. He had seven combined tackles and a pick in a key Week 14 win against the Cardinals, and a week later Jones had a season-high 11 combined tackles in a Rams win over the Seahawks.

An ankle injury kept Jones out of the Rams’ last two regular-season games and their first two playoff games. After playing limited snaps in the NFC title game, Jones went on to make several games in the Super Bowl. He had six solo tackles, two tackles for losses, three quarterback hits and an ailing Rams win over the Bengals.

However, Kenny Young’s Los Angeles to Denver trade gave Jones an opportunity to start in Week 8 and he thrived from that point. He recorded nine combined tackles, a half sack and an interception in the Rams’ 38-22 Week 8 win over the Texans. He had seven combined tackles and a pick in a key Week 14 win against the Cardinals, and a week later Jones had a season-high 11 combined tackles in a Rams win over the Seahawks.