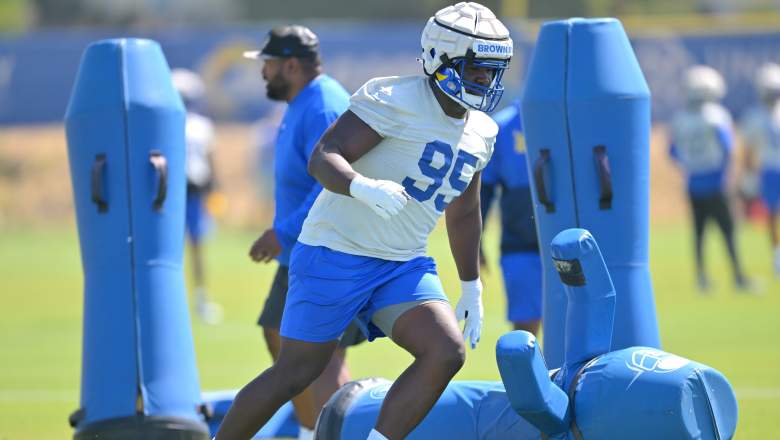 The Los Angeles Rams now have a roster spot to address for the first six games of 2022 after reserve nose tackle Bobby Brown III was suspended by the league Monday, July 18 for violating the NFL’s substance abuse policy via ESPN.

Brown, drafted in the fourth round of the 2021 draft, will be suspended without pay. ESPN’s Rams insider Sarah Barshop adds that Brown can still attend all preseason games and become officially eligible again on Oct. 17 when the Rams welcome Baker Mayfield and the Carolina Panthers.

But now the new question in the “Rams House”: Who do the Rams turn to if they want to compensate for this loss? And who would be an option as a substitute while Brown is on the sidelines?

His name was previously mentioned as a potential late addition. But given the impact of Monday’s ruling, the Super Bowl champions may have to face off against a three-time All-Pro selection that’s still available… and a former Ram: Ndamukong Suh.

The rumor mill continues to spin as to where the five-time Pro Bowler and Super Bowl 55 champion will end up with the Tampa Bay Buccaneers.

The last update with Suh came via USA Today’s Tyler Dragon on Wednesday, July 13 – who reported that the Cleveland Browns have emerged as an interested team alongside the Minnesota Vikings and Las Vegas Raiders.

However, Browns insider Mary Kay Cabot of the Cleveland Plain dealer reported that Cleveland denied there was any interest in Suh.

However, Suh remains unsigned. And considering his age and worth at this point in his career, he’s seen more as “hire” for a defense that needs some depth in the trenches.

And in the case of the team he played for in 2018 and went to his first Super Bowl with, the Rams look more attractive than ever given Brown’s suspension.

The Rams will need nose tackle depth while the 6-foot-4, 325-pound Brown is gone. It’s one thing not having Brown for the early part of the season. But remember, the Rams lost veteran starter Sebastian Joseph-Day to the Chargers during free agency.

The Rams begin the season with a Buffalo Bills team that finished sixth in rushing yards last season. But even with Brown gone, the Rams will have to make a game plan for the Arizona Cardinals’ Pro Bowler James Conner, the San Francisco 49ers and their powerful ground game, and then the Dallas Cowboys’ three-time Pro Bowler Ezekiel Elliot in this Carolina -Game.

Suh is already familiar with the Rams’ defense and has previously worked well with Aaron Donald. The only other towering and massive option for the Rams is 6-foot-4, 330-pound veteran A’Shawn Robinson, who is entering a contract year. Greg Gaines could also be a nose option, but he’s shown to be a better pass rusher and the Rams may be reluctant to pocket him on most of his snaps. There’s also Michael Hoecht, who scored seven tackles in limited action last season. Regarding Gaines and Hoecht, however, both weigh no more than 315 pounds and can be considered too small to play the nose tackle spot on every down.

Suh doesn’t have to start. He can step in as a potential rotation figure until Brown is cleared to go.

But if it’s not Suh, the Rams could be looking at these two other options still available:

Star Lotulelei: The former first-rounder is younger than Suh at 32. He has experience playing inside and freeing Pro Bowl linebackers Luke Kuechly in Carolina and Tremaine Edmunds in Buffalo. It could be an interior option to eat up space for Donald and newcomer Bobby Wagner.

Linval Joseph: The two-time Pro Bowler recently played for Brandon Staley – who brought the Rams’ defense to the Chargers. The 33-year-old recorded 57 tackles, 30 solo stops and three stops behind the line in 12 starts for the ‘Bolts’ last season.

Again, that only applies if the Rams occupy the spot that Brown vacates for six games. But judging by the depth and options inside, the champions may need to bring a familiar face back to the Rams House.

Star Lotulelei: The former first-rounder is younger than Suh at 32. He has experience playing inside and freeing Pro Bowl linebackers Luke Kuechly in Carolina and Tremaine Edmunds in Buffalo. It could be an interior option to eat up space for Donald and newcomer Bobby Wagner.