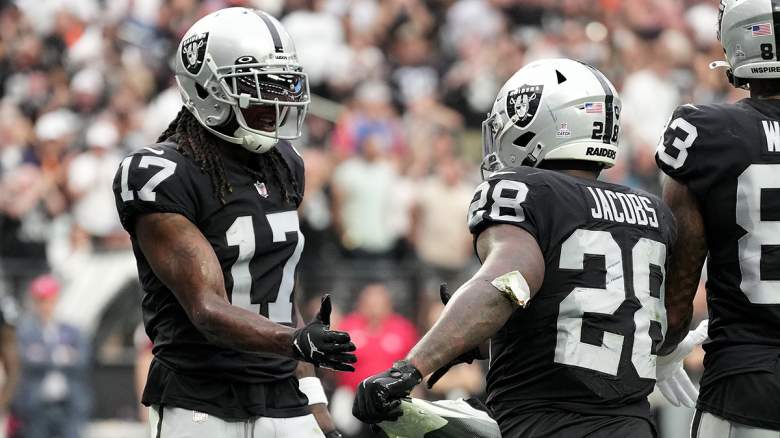 Although Davante Adams has been a superstar for a few seasons now, he’s made a lot more headlines since joining the Las Vegas Raiders. Most of them were good, but he has some bad ones. Earlier in the season, he was in hot water for shoving a cameraman after a loss to the Kansas City Chiefs.

Now he’s in trouble with the NFL for stalking an official. During the team’s Week 11 game against the Denver Broncos, Adams began yelling at an official after he believed Justin Simmons punched him as a defenseless receiver. Instead of Simmons receiving a penalty, Adams was hit with an unsportsmanlike conduct flag.

To add insult to injury, the NFL wide receiver will now owe money. According to NFL Network’s Tom Pelissero, the league fined Adams $29,785 for “abusive language to an official.”

Interestingly, Simmons was fined $15,914 for “unnecessary game rudeness.” The NFL is essentially saying that Adams was right that there should have been a flag, but he shouldn’t have used “offensive” language towards an official. Unfortunately for the Raiders, they still had to deal with the penalty kick while the Broncos walked away clean.

It’s been a tough season for the Raiders with a 3-7 record. Before the game in Denver, the team was tied 6-0 in one-score games. When Adams got the game-winning touchdown in overtime, he was able to snap the streak. As soon as he crossed the goal line, he began silencing the Broncos crowd, even calling out cornerback Patrick Surtain.

It was a lively performance from a player who is usually quiet most of the time. However, he didn’t think what he was doing was excessive.

“I still think that was pretty cool,” Adams said Wednesday. “It wasn’t that crazy. That was probably about 4 out of 10. But sometimes you have a bit more emotion, especially considering how the season went. Making a big game at any point in a big situation or mid-game is something that, as I mentioned, is contagious. So, sometimes I have that little extra energy — most of the time I keep it and try to just focus on that “the job isn’t done” mentality, but sometimes it’s good to show some of that and let it sneak out to your teammates and also for yourself.”

The Raiders have a tough road ahead of them, but they’re not completely out of the playoff race just yet. Teams made big runs to finish the season before. Now that the team is finally back in the Victory Column, Adams is hoping the momentum will continue to build.

“Momentum for me is a little bit more than what we have right now,” Adams said. “I think it’s definitely a good start, but I think you need to do a little bit more of what we’re doing to gain momentum. But I think we’re doing the right thing and obviously we finished the game. There’s a lot of things – we gave them chances that we shouldn’t have given them, maybe in terms of offense, not capitalizing on certain situations, but for the most part, in terms of finishing this game, I think I do said winning takes care of a lot of things. So just morals, we’ve had a good prep week all of last week, came in and had the same type of day as today, a little more over our heads. And then, yes, we just have to capitalize on another great prep week. I think everyone has the right mentality and is approaching it the same way and everyone is looking hungry. So we just have to keep doing that.”