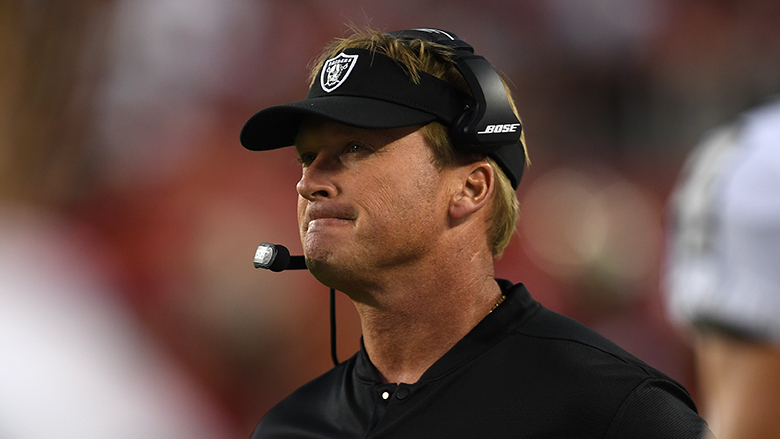 Jon Gruden is out of coaching the Las Vegas Raiders after several emails he wrote over a seven-year period between 2011 and 2018 were released about an investigation by the New York Times, which was released on Monday, October 11, 2021 , has been published.

Several examples of racism, homophobia, and misogyny were included in these comments, uncovered through a separate NFL investigation into workplace misconduct within the Washington Football Team (WFT). Also included were specific and problematic reviews of former San Francisco 49ers safety Eric Reid, and the attempts he and then the Niners quarterback Colin Kaepernick made to expose social injustice by kneeling for the national anthem while members of the 49ers squad.

“In numerous emails during a seven-year period ending in early 2018, Gruden criticized Goodell and the league for trying to reduce concussions, saying that Eric Reid, a player, was demonstrating while the national anthem was playing should be fired. ” according to the New York Times report.

Reid joined Kaepernick and sparked a global movement for social justice when the two went down on their knees on September 1, 2016 before a game against what was then the San Diego Chargers.

In total, Reid played seven NFL seasons, the first five with the 49ers and the last two with the Carolina Panthers. According to the Pro Football Reference, he started 98 of the 99 games he appeared in and received a Pro Bowl selection during his rookie season.

Reid publicly complained towards the end of his career that his efforts to promote social justice in the form of kneeling during the anthem earned him undue professional discrimination from several NFL franchises, if not in some cases thoroughly blackballing. Reid played his final season in 2019.

It wasn’t just Reid or Reid and Kaepernick’s joint efforts to protest the police brutality that Gruden grappled with.

The former NFL head coach did not hold back when he insultingly described several people and developments related to the league in his emails. These communications were addressed to former WFT President Bruce Allen and several others. Gruden and Allen developed a relationship when they both worked for the Raiders in the late 1990s and early 2000s, according to the New York Times report.

Gruden used one homophobic insult, among others, regarding NFL commissioner Roger Goodell and another regarding former NFL player Michael Sam, an openly gay man drafted by the St. Louis Rams in 2014.

Defensive End Carl Nassib, the only openly gay player in the NFL, is currently a prolific member of the Raiders roster.

Gruden’s decision to step down was announced by the team on Monday evening and shared on social media via the Raiders official Twitter account.

“I resigned as head coach of the Las Vegas Raiders” Gruden said. “I love the Raiders and don’t want to be a distraction. Thank you to all of the Raider Nation players, coaches, staff, and fans. I’m sorry, I never meant to hurt anyone. “

While Gruden has left the league and is unlikely to return anytime soon, media members have speculated that the discriminatory and hateful feelings he shared over several years persist in several corners of the NFL.

Monte Poole, who covers the Golden State Warriors for NBC Sports Bay Area and hosts a show on how the race works in the United States, went on Twitter Monday night to share his thoughts on the matter. As it turned out, they were best expressed through someone else’s words.

“That Gruden story is why the NFL just had to pay Kaepernick instead of going through all of these subpoenas.” Poole retweeted from the account of the podcast presenter and comedian @rodimusprime.

While Gruden has left the league and is unlikely to return anytime soon, media members have speculated that the discriminatory and hateful feelings he shared over several years persist in several corners of the NFL.