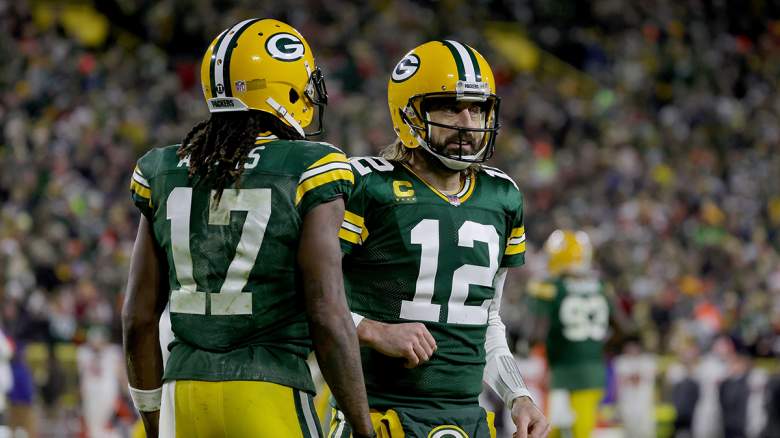 Davante Adams has become one of the greatest wide receivers in Green Bay Packers history in recent years, but that still wasn’t enough to keep him on the team. Despite getting to play alongside Aaron Rodgers, one of the greatest quarterbacks of all time, Adams forced a move to the Las Vegas Raiders this offseason. He even admitted he signed a smaller deal to make it happen.

After Adams was traded, Rodgers took a lot of blame for the star wide receiver wanting out. While the two actually had a good relationship, there’s a lot of truth to the claims that the quarterback played a role. According to Adams, Rodgers was honest with him about how much longer he could play, and the wide receiver knew he had to think about his future.

“Oh yes. We spoke several times. We also talked throughout the whole process and he was aware of where I was and I knew where he was. We had conversations just like what he said the other day” , Adams said after a mandatory mini-camp workout on June 9.

“He mentioned that we had discussions about his future and what he thought his time in Green Bay or just football in general would be like and that also played into my decision,” he continued. “Because where I’m at in my career — and that’s no shot at anyone, any other quarterbacks, in Green Bay, I especially love Jordan Love, he’s a great guy — I have ambitions to do really, really big things doing and being, and there just wasn’t a point in my career where I was willing to sacrifice Aaron because after a year or two he wasn’t around.”

Rodgers is 38 years old, just a year younger than Peyton Manning when he retired. He could be nearing the end of his storied career. However, he still plays at the elite level and has won consecutive MVPs. Quarterbacks are now playing into their 40s, and Rodgers probably could if he wanted to, but he’s been candid recently about starting to consider hanging up his cleats.

“This is my 18th season. Of course, all the time you’re thinking about the next chapter and what’s next in your life. That doesn’t mean you’re not fully invested,” Rodgers said recently on CBS Sports. “When I said I’m back, I’m 100 percent invested, and Matt[LaFleur]and I keep in touch all the time, and Tom and the young quarterbacks, and when I’m here, I’m totally into it. and the boys know that. They know what to expect from me, the type of game, the type of leadership, and that’s what they’re going to get.”

Adams’ comments only fuel speculation that Rodgers may be nearing the end. He would surely know more than most. The situation is still fluid, but there is a lot of momentum building that Rodgers could be entering his final years in the NFL.

Wide receivers don’t usually leave a great quarterback like Rodgers, especially since he had such a great connection with Adams. Still, the wide receiver won’t regret leaving Green Bay. The Packers have been a better team over the past two decades, but the Raiders are a team on the rise.

Plus, Adams can’t even hide how happy he is to be in Las Vegas. Unless the Raiders are much worse than expected, the five-time Pro Bowler won’t regret his decision.