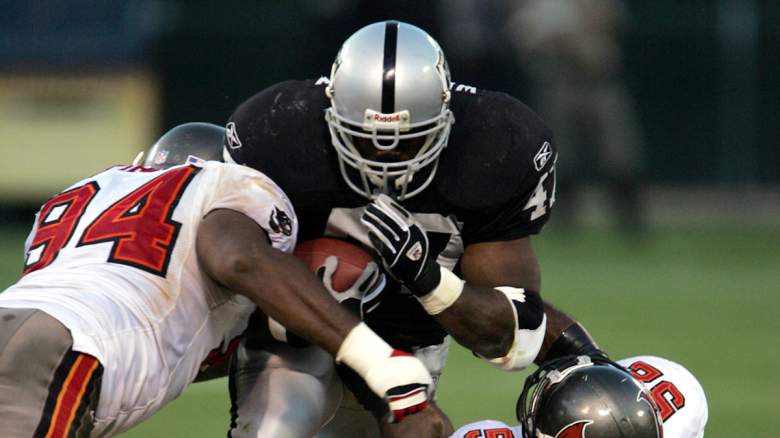 Over the years, the Las Vegas Raiders have always been open to giving jobs to former players and their trusted members. Just last year, the team nearly signed veteran offensive lineman Kyle Long, who is the son of Hall of Famer Howie Long. That didn’t work out, but the team will now bring in the son of another former raider.

According to Element Sports, offensive lineman Tyrone Wheatley Jr. has signed a deal with Las Vegas.

You don’t have to go far back in Raiders history to see Wheatley’s connection to the team. His father, with whom he shares the name, played running back with the team from 1999 to 2004. He even led the Raiders in 2000 with 1,046 rushing yards and was on the roster in the 2002 Super Bowl matchup against the Tampa Bay Buccaneers.

Wheatley was a key part of Jon Gruden’s offense during his debut on the team. He started his career with the New York Giants as a first-round pick from Michigan but really found his footing with the Raiders. His son is now hoping for a similar development, having started with the Chicago Bears but never had a chance to play a game.

The younger Wheatley certainly inherited his father’s height and more. He’s 6-foot-6, 290 pounds. He would never be a running back that size. In fact, he started out as a tight end. He followed in his father’s footsteps and played in Michigan before joining Stony Brook.

Wheatley was undrafted in 2020 and decided to join the Spring League where he switched to offensive tackle. He eventually ended up with the Bears and spent last season on their training team. This is actually an interesting addition for the Raiders. Wheatley is still very raw in the tackle, but certainly has the size and athleticism to eventually be a good player. He still needs to gain some weight and work on his technique, but he’s a good project for offensive coach Carmen Bricillo. He’s unlikely to play a major role on the team this season, but the Raiders could put him in the practice squad and see if they can develop him into someone they can play. He’s only 25 years old, so he has plenty of time.

That offseason, the elder Wheatley decided to join the enemy when he was hired as the running backs coach for the Denver Broncos under head coach Nathaniel Hackett. The two previously worked together on the Jacksonville Jaguars staff.

Wheatley joined the coaching staff in 2007 and has been coaching ever since, most recently as head coach for Morgan State. He decided to jump back into the NFL and will now practice twice a season against his former team. Another level will be added to the pairings if Wheatley Jr. makes the list.

CONTINUE READING: The Raiders’ Chandler Jones reacts to facing the former team in the home opener