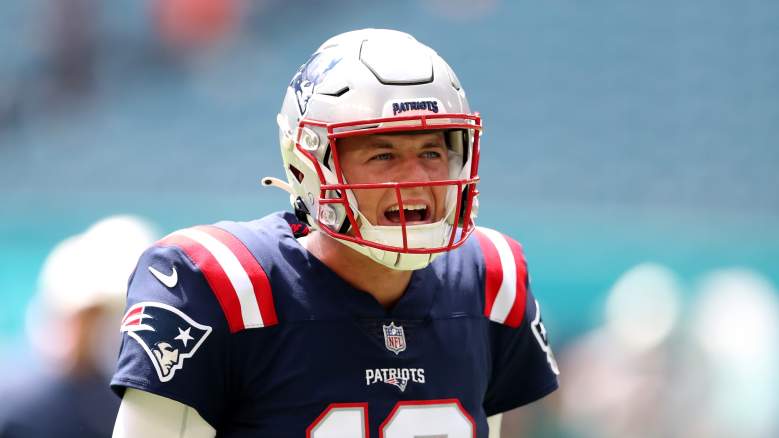 If everyone is being honest, which appears to be the case, New England Patriots sophomore quarterback Mac Jones hasn’t been great this season.

For most of the 2021 season, Jones’ rookie campaign, he seemed to be the darling of the QB class, where five signal callers were hit in the first round. Jones was the last pick in 15th overall, but he had the most success.

He helped lead the Patriots into the postseason with a 10-7 record and finished second in offensive Rookie of the Year against Cincinnati Bengals star wide receiver J’Marr Chase.

Because of his performance as a rookie, most expected him to make the leap as a sophomore that many above-average NFL quarterbacks experience. So far, Jones appears to have regressed rather than improved.

Karen Guregian of the Boston Herald predicted this before the start of the season, and Ben Volin of the Boston Globe wrote about it ahead of the Patriots Week 3 matchup against the Baltimore Ravens in the home opener in New England.

“What didn’t work, let me put it this way: I didn’t think I was wondering if I needed to recalibrate my expectations for Mac Jones two games into his sophomore NFL season,” Volin said. “But I am wondering if I haven’t completely recalibrated myself yet. What’s frustrating about Jones is that he doesn’t do well the things he’s supposed to do well.”

Jones was billed as an immobile quarterback with an average to slightly above average arm who would make up for his physical deficiencies with cleverness, hard work, and accuracy. Right now we only see hard work. He made some amazing decisions and wasn’t as accurate as advertised. He’s thrown two interceptions in two games, and there could have been more if each errant throw hit a defender’s arms.

“Now we know he doesn’t have a missile/laser arm by NFL quarterback standards,” Volin wrote. “He reminds me of Chad Pennington. He also reminds me that Tom Brady could throw rockets if he had to. Maybe Jones is building arm strength. Brady certainly did. But there is only limited improvement that can be made to his fastball.”

Unless Jones’ arm strength improves drastically, which seems like the unfortunate reality, he needs to get smarter and more accurate with the ball. Like many others, Volin seems a little taken aback by what appears to be a regression from Jones.

“When it came to playing the most important position in sport, if not all sports, he seemed smarter than his experience suggested,” Volin wrote. “So it’s odd that Jones is making rookie mistakes this year. He throws himself into close and double cover too often, including an inexplicable decision to do so to Jonnu Smith in the second half of Sunday. There were instances, like the interception of Minkah Fitzpatrick on Sunday, where it was almost as if Jones didn’t see a second defender.”

Jones has seemed lost, frustrated, and contradictory at times. The Patriots’ offense and lack of continuity could be an issue, but Jones also has to take some of the blame.

“I think he also relies too much on Jakobi Meyers,” emphasized Volin. “Meyers is a good possession receiver and he was efficient on Sunday – nine catches on 13 goals. But he’s been inefficient in the past – he had 83 catches on 124 goals last season – and he’s not a yard-after-the-catch threat. Leaning too much on Meyers isn’t going to make the offense more dynamic. Nelson Agholor and Bourne need to be involved.”

Jones throws in the guy he must have the most reliable. However, it doesn’t help his cause when one of his better weapons – Bourne – is relegated to the sidelines while Patricia appears to prove a point as he attempts to establish himself as an offensive head in the NFL.

In any case, something must go wrong for Jones. If they don’t, the blanket he and Josh McDaniels pulled last season will suddenly collapse.

The Patriots were not in action Thursday night, but several current and former players from the organization watched the Steelers take on the Cleveland Browns. Some of them took to Twitter to comment on the amazing catch made by Steelers rookie wide receiver George Pickens on a sideline throw from Mitchell Trubisky.

If you haven’t seen the hook yet, take a look. It’ll probably give you some Odell Beckham Jr. vibes.

Shortly after the catch, former Patriots Mohamed Sanu and Dont’a Hightower took to Twitter to express their appreciation for the catch.

Two-time Super Bowl champion Vince Wilfork was inducted into the Patriots Hall of Fame on Thursday. A stripped down Wilfork spoke to the media while donning his red jacket associated with the honor.

Jim McBride of the Boston Globe captured one of the key moments of the ceremony on camera.

Wilfork will also be recognized during Sunday’s game. Congratulations on one of the greatest nose tackles of its time.

If you haven’t seen the hook yet, take a look. It’ll probably give you some Odell Beckham Jr. vibes.