Packers’ Adrian Amos has an eyebrow-raising comment about Justin Fields 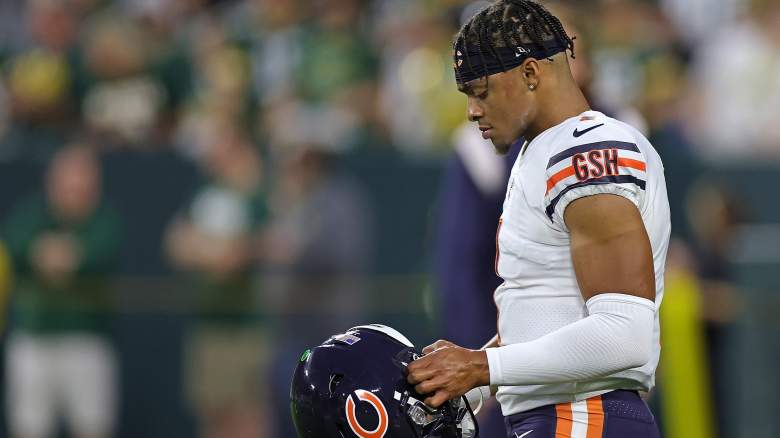 The Chicago Bears suffered another loss to the Green Bay Packers on September 18, losing 27-10 at Lambeau Field.

It was a particularly ugly game for sophomore quarterback Justin Fields and the offense. Fields went 7-11 for 70 yards, no touchdowns and an interception, also rushed for 20 yards and a score. Adjusting the yardage after the 3.0 sacks Fields took, the team finished with 48 net passing yards.

Stats aside, concerns for Fields began to mount after Chicago’s Week 2 loss. It’s early days, and few, if any, have written off the young signal-caller yet, but spanning two games this season, it’s fair to say that Fields has only played two solid quarters of football (see: the second half of Chicago’s win in Week 1 against the San Francisco 49ers). He looked awkward throughout the game against Green Bay, save for the opening run, and he has yet to show the kind of composure your starter needs to have.

The Bears and their fans still hope Fields can be the organization’s first true franchise quarterback — and he still could — but the QB’s sophomore performance against the Packers reminded many Bears fans of the former hopeful of the team in that position, Mitch Trubisky.

The Bears are currently the worst offensive in the NFL in two games, and it’s not particularly close. Chicago averages 76.5 yards per game, with the second worst team, the New York Giants, averaging 159.0 yards per game.

After Chicago lost to Aaron Rodgers and company for the 16th time in 18 games, Chicago Tribune insider Brad Biggs spoke to several Packers players about what they’ve seen from Fields and the Bears offense. One of those players is certainly Adrian Amos, who played for Chicago from 2015 to 2018.

Amos played with Trubisky in the 2017 and 2018 seasons and has played against Fields in each of the past two years. Biggs asked Amos to compare the two QBs, and he wrote the following about his exchange with Packers safety:

In a September 19 appearance on 670 The Score’s Mully & Haugh Show, Biggs explained his conversation with Amos:

“This guy was teammates with the last quarterback the Bears tried when he was young,” Biggs said, referring to Trubisky. “He studied Fields to play against him, he competed against him. How do you stack these two guys? My take on Adrian Amos was, ‘If I don’t have anything nice to say, I won’t say anything at all.’ It was sort of my takeaway. Could he have meant something else? I suppose that’s possible, but that was the impression I had at the end of our conversation.”

While Trubisky went 29-22 in his 51 starts with the Bears, he often looked lost when attempting to read defenses and he never quite improved the play of those around him.

The Bears threw the ball less in Week 1 due to the rainy weather, but Fields had just 11 tries in Week 2, stunning fans and analysts alike. After the loss to Green Bay, Fields admitted he wished he had thrown the ball more.

“Of course,” he said. “I’m a competitor. But again, my job is to lead the play I’ve been given as best I can. I don’t control any of it.”

When asked what was missing or could be missing in the passing game, Fields had no answer.

“I’m not sure what’s missing from the passing game,” he admitted. “I do not know.”

The 23-year-old quarterback is still learning Luke Getsy’s offense, which is the third system he’s had to learn in three years when you factor in his college experience at Ohio State. Here, too, it could start to gel at any time. But those who blame his O-line and receiving corps for his early struggles should perhaps press pause.

credit to ESPN’s Courtney Cronin for compiling the following stats: Fields had the longest time before pass attempts in two games (3.26 seconds), he was inaccurate, with an off-target percentage of 30%, which is the second-highest in the NFL — and his receivers also seem to be opening.

It will be crucial for Fields to bounce back in Week 3 against the Houston Texans. If he plays better, Bears Nation should breathe a sigh of relief. If he continues down this path, however, trouble time could soon come in the Windy City.

“I’m not sure what’s missing from the passing game,” he admitted. “I do not know.”