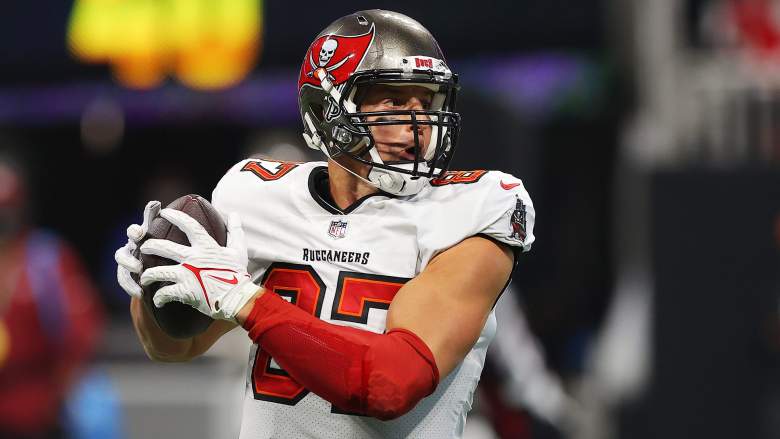 When Dallas Goedert first went on injured reserve with an unusual shoulder injury, rumors swirled that the Philadelphia Eagles might be signing a high-profile free-agent tight end to replace him. Rob Gronkowski was the most popular choice, although it would take some persuasion to lure him out of retirement.

Jimmy Graham, Jared Cook and Eric Ebron were three other names tossed around. But Gronkowski is by far the biggest fish in the ocean if he wants to give up his new leisure life, one commented mascot fights and participation in the SAW games. The 33-year-old future Hall of Famer looks like he’s having too much fun. And would he really turn his back on Tom Brady and join one of his fiercest rivals? Probably not.

Anyway, the Gronkowski post-Philadelphia speculation is out there. We first wrote about it on November 15th. Now, Philly Voice’s Jimmy Kempski has jumped on the trend, mentioning that Gronkowski is an influence on the Eagles in a recent mailbag:

Head coach Nick Sirianni didn’t sound like he was interested in exploring a free hand for a new tight end. Goedert is entitled to return from injured reserve in Week 15 against the Chicago Bears on December 18th. That’s only three weeks away. The eagles seem content weathering the storm with Jack Stoll as a starter, assisted by Grant Calcaterra and Tyree Jackson.

“Replacing Dallas will not be easy [Goedert], and not just one person does it. Let’s see how long he’s out. Of course you know he has to be out for at least four games and we will play that by ear,” Sirianni told reporters. “So how do we replace him? you can’t, can you? You have to do it in committee. They have tight ends which is there we have a lot of confidence in this building; it will begin with them.”

“You just have to balance it,” Sirianni said. “You won’t be able to duplicate everything he does because he has unique abilities. You’re trying to figure out who can do what they’re doing, and can they do it, and then you put that stuff in your offense.

The Eagles will officially don their all-black uniforms Monday night soccer, complete with these sleek looking new black helmets. They also announced the musical soundtrack for week 12: tunnel vision, written and performed by Dot Cromwell and Lester London. The song, along with poster art by Hap, is part of the Eagles Gameday Poster Playlist presented by Pepsi: