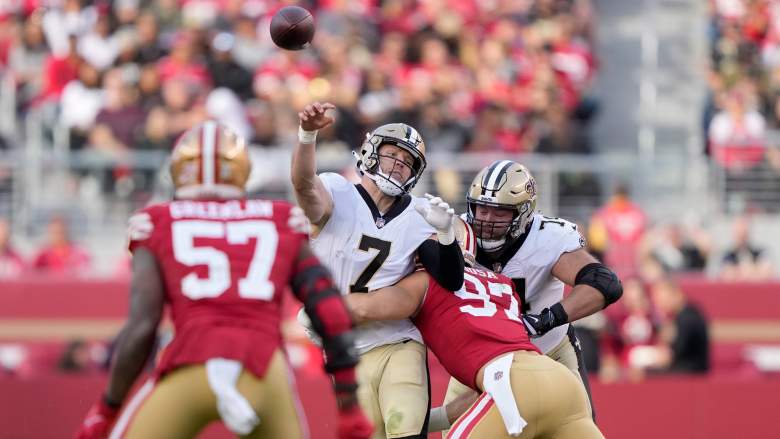 The San Francisco 49ers and Miami Dolphins have yet to resume practice ahead of their marquee showdown on Sunday, December 4 – but some words have already been exchanged.

Not only from former 49ers running back Raheem Mostert, or from Deebo Samuel and Charles Omenihu in response from the 49ers’ side on Monday, November 28, but even former 49ers are involved in sending a warning to the Dolphins.

Donte Whitner provided his hot take on the upcoming heavyweight bout between the 8-3 Dolphins and the 7-4 49ers. Or as NBC Sports Bay Area calls it, “Hitner’s Hot Take.”

The hardened safety, who first ran for the 2012 NFC Champion 49ers, was amazed at how the former 49ers on the Dolphins’ side, including recently added Jeff Wilson, challenged the 49ers’ defense.

“Can you believe the noise coming out of Miami Dolphins camp?” Whitner said in a clip released Monday. “And it’s led by two ex-49ers, Raheem Mostert and Jeff Wilson Jr. Why would you want to challenge the league’s No. 1 defense?”

Whitner then rolled out a list of the players who were called out.

But then the warning came from the mouth of the two-time Pro Bowler, who played in three NFC championship games in all three seasons he was with the 49ers.

“So you better get ready on Sunday,” Whitner warned the dolphins. “Defending the 49ers, they’ll be after you guys.”

Even former 49ers offensive coordinator Mike McDaniel has his opinion on the upcoming reunion and battle of the up-and-coming Super Bowl contenders.

McDaniel, who is currently nearing the postseason in his first season with Miami, has been asked by the Miami media about his take on the matchup.

“I’m going to do everything in my power to make it another game because I think that should be every head coach’s aim to lose the players and I really stray from that to myself do,” McDaniel said.

But he still holds the 49ers in high regard.

“I think I have a very high opinion of the 49ers franchise, the players and the coaching staff. I have a lot of love for everyone I work with, especially over this extended period of time,” said McDaniel. “So those relationships and people will always be important to me.”

But arriving at Levi’s Stadium this time, he knows he’s being directed to a different area of ​​the venue compared to years past.

“Regarding this week, it’s going to be weird for a second to be in a different dressing room or pull up on the bus in a weird area or be on a different sideline,” McDaniel said.

He was also asked if he could see old coach Kyle Shanahan back on the field for the first time. McDaniel told the Miami media that he has a ritual of looking away … which will soon include not looking directly at Shanahan.

“I don’t look over the sidelines at opposing coaches that often,” McDaniel said. “So I don’t think I’ll feel anything different on the field than any other game [Shanahan]. In general, I owe him a lot. I’ll always be grateful, and I think he’s always been one of the best, if not the best, offense coach and head coach I’ve ever been with.”

But he ended up dropping a light-hearted joke.

“I’m also not going to be doing any drills in the field with him in Oklahoma this week,” he said.

“Regarding this week, it’s going to be weird for a second to be in a different dressing room or pull up on the bus in a weird area or be on a different sideline,” McDaniel said.