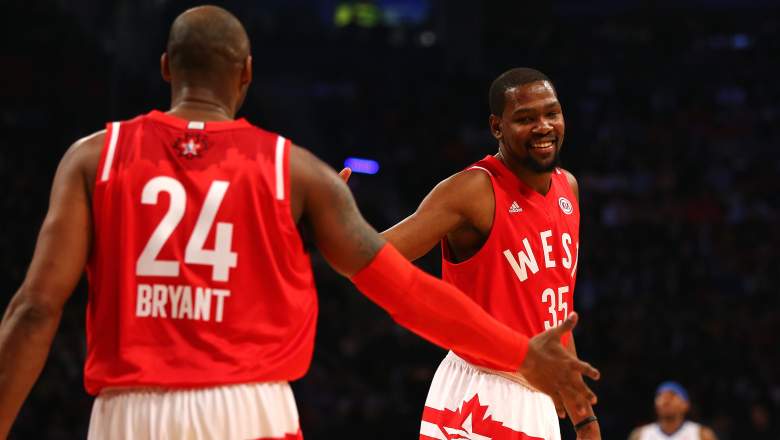 During his 20-year NBA Hall of Famer career, the late Los Angeles Lakers legend Kobe Bryant clinched five NBA titles. And while Bryant likely enjoyed winning each of those titles, beating the Orlando Magic in the 2009 NBA Finals must have held some sentimental value for the late superstar. Not only was it the first title he won after a nasty divorce in 2004 without Hall of Famer Shaquille O’Neal, but it was also the first time he won the Finals Most Valuable Player award.

After Shaq was sent to the Miami Heat in 2004, Kobe had to make adjustments to his game as the Lakers’ new leader. It proved difficult in the first three seasons of the post-Shaq Lakers era. They missed the playoffs and were eliminated twice in a row in the first round before winning the title in 2009. Brooklyn Nets star Kevin Durant says the difference between Kobe in the early non-Shaq years and winning the title in 2009 was the addition of big man Paul to Gasoline during the 2007-08 season.

“I’m being real, Bean (Kobe Bryant) would tell you the difference between him in ’06 and him in ’09 was the addition of Pau Gasol and the chance to really chase a chip.” said Durant in response to a fan via his Twitter account on June 13.

Kobe played with his fair share of talented players throughout his two-decade NBA career. Many of his teammates are, or will be, inducted into the Hall of Fame. But according to his Olympic basketball teammate Michael Redd, being part of a “super team” was something Bryant never thought of.

“Kobe is a year older than me and at the time we just disagreed that we would never play together. We enjoyed each other. We were friends and boys, but I don’t train with you … although me and Kobe trained together a couple times over the summer during our Olympic run,” Redd told Brandon “Scoop B” Robinson in 2020.

“But the younger guys were the ones who really started that conversation and obviously they were close. They came in together. Same agents. Same draft with D-Wade, ‘Melo, Bosh and LeBron, Chris Paul right behind them…so those conversations were more with them than the older guys.

The NBA has proven to be a league of eras. And while “superteams” have been derided by past players, they’ve become widespread in recent years as we’ve seen stars like Durant and LeBron James teaming up with other superstars to form monster teams. But is the end of the Superteam and Big 3 era near? Looking at the teams that have advanced deep into this year’s playoffs, the energy seems to be shifting.

Take for example the two teams in the finals, the Golden State Warriors and the Boston Celtics. While the Warriors still have the same masterful core of Steph Curry, Klay Thompson and Draymond Green, they’re nowhere near the same team as they were in years past.

Draymond isn’t the same offensive threat and Klay Thompson is coming off two serious injuries. But they were able to fill out their roster with viable role players like Andrew Wiggins, Jordan Poole and Kevon Looney to give themselves a more diverse roster.

The Celtics have done the same with Jaylen Brown and Jayson Tatum, giving their superstar duo a reliable supporting cast of role-playing players like Grant Williams, Robert Williams, Marcus Smart and Al Horford. It gave them a legitimate shot at winning this year’s title.

While the concept of “superteams” gives organizations a bigger box office, it may no longer be sustainable as a winning formula.