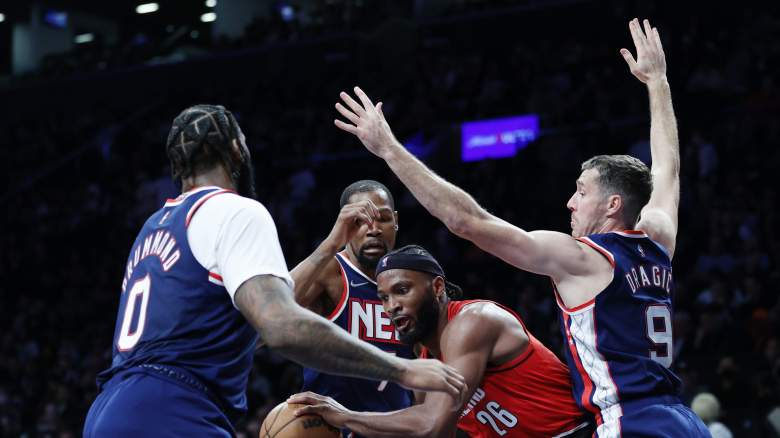 After a first-round win by the Boston Celtics, many big changes await in the organization of the Brooklyn Nets. Most would agree that the Nets roster is the first thing to tackle this summer. While it’s true that Brooklyn has arguably one of the most talented trios in the league in Kevin Durant, Kyrie Irving and Ben Simmons, their roster is very top-heavy. And that showed in their first-round matchup against the Celtics.

The Nets have seven players from last year’s roster scheduled to enter the free-agent market on July 1. That means they’ll have to make some tough decisions about who they’ll keep in next year’s squad. The Athletic’s Alex Schiffer says one of the free agents he expects the Nets to bring back is their reserve guard Goran Dragic, whom they acquired through the buyout market after the trade deadline last year.

“Dragić was perhaps the Nets’ most consistent player in the postseason loss to the Celtics, averaging 10.5 points per game in the series on 56 percent shooting. His regular season was limited towards the end after a battle with COVID-19, but he provided the Nets with a steady hand and a reliable ground general, especially when Irving was still a part-time player,” Schiffer writes for the Athletic.

“It’s worth considering that Dragić was Nash’s understudy in Phoenix. As Nash and Marks attempt to reshuffle the roster, Dragić’s relationship with Nash and his willingness to be a sixth man could be factors. It’s worth remembering that the Nets can only apply their taxpayer’s exemption to one player. Enlisting Dragić for the minimum as a backup point guard isn’t a bad idea. If Irving isn’t in the lineup, Nash knows what he’s got with The Dragon.”

Nets rookie Kessler Edwards had a tough stretch of games during the regular season. Rough enough to fall out of head coach Steve Nash’s rotation. But the rookie wing never lacked confidence despite being on the bench. Edwards just stayed ready for his next opportunity and it ultimately paid off for him. His two-way deal was turned into a standard contract for the remainder of the season. Schiffer expects the much-improved Edwards to be back in his second season with the team.

“Edwards earned the first two-way spot on the roster after a strong summer league and developed into a 3-and-D threat as the season progressed. His contract was converted to a standard NBA deal late in the season. He played sparingly in the playoffs but delivers on what the Nets need more of — an athletic wing who can contribute at both ends of the parquet. Edwards’ salary would only be $1.5 million next season, and it fits into the player development discussion Mark brought up last week,” Schiffer writes.

“Edwards adding muscle and proving to be a reliable rotation figure would be a welcome sight for a team lacking in athleticism and two-way players. His team-friendly contract, advantage and ability to fill in gaps make him worthy of the option.”

With Eastern Conference competition proving tough in these playoffs, roster building will be even more disadvantageous for the Nets this season. As a team likely to be among the title contenders in 2023, they need a roster of players ready to produce now.