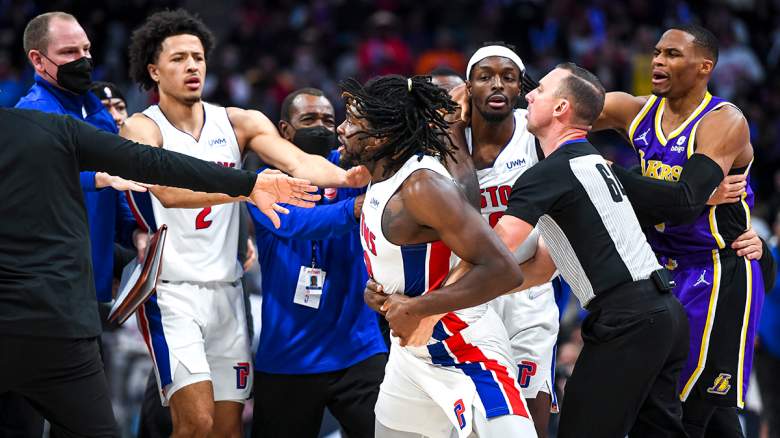 Total chaos broke out between the Los Angeles Lakers and the Detroit Pistons on Sunday after LeBron James elbowed Isaiah Stewart in the face, causing him to bleed. The 20-year-old tall man quickly lost his temper and wanted to compete against the superstar. He had to be held back several times by several people. Even then, he almost found his way to LeBron.

If Stewart had just accepted the foul, he would not have gotten into any trouble. However, the NBA has given him a two-game ban for no pay for pursuing LeBron “repeatedly and aggressively” in “unsportsmanlike ways”. The Lakers star will only be banned for one game for his role.

This marks the first time in LeBron’s 18 year career that he has been suspended. He will miss Tuesday’s game against the New York Knicks. This is only Stewart’s second season in the NBA and he is now facing his first ban. Had he not been held back so diligently and had LeBron actually hired, he could face a much longer suspension.

The news that LeBron is being suspended should come as no surprise. If the brawl hadn’t broken out, he would still have been thrown off the field for the Flagrant 2 foul he committed on Stewart. Although the Pistons’ big man was keen to fight LeBron, the Lakers star was still trying to reach out to Stewart and apologize after the game, according to The Athletic’s Shams Charania.

“I was told that LeBron James was trying to track Isaiah Stewart’s number after the game to apologize again and let him know it was an accidental hit,” Charania said on the Pat McAfee show.

With the Lakers set to play the Pistons again next week, LeBron clearly wants this to be an isolated incident and is not trying to start a feud with a young piece. When you consider that neither player has yet dealt with the situation, the next duel between the two teams was even more fascinating.

As mentioned earlier, LeBron has never been suspended before. He has no reputation as a dirty player and there is no evidence that he intentionally tried to harm Stewart. Head coach Frank Vogel had the opportunity to discuss exactly what led to the scuffle.

“It was an unfortunate contact,” Vogel said on Silver Screen & Roll after the game. “[LeBron] had one elbow to the chest which was a foul and he was trying to lose contact and he was making accidental contact. It was obvious enough for a Flagrant 2, but the reaction was what it was and I think our guys did a good job protecting a teammate but not escalating it. “

All in all, it was lucky that no two players actually fought during the flair-up. This situation could have been a lot worse than it was in the end. Despite being suspended, LeBron avoided confronting Stewart when he was at the height of his anger.