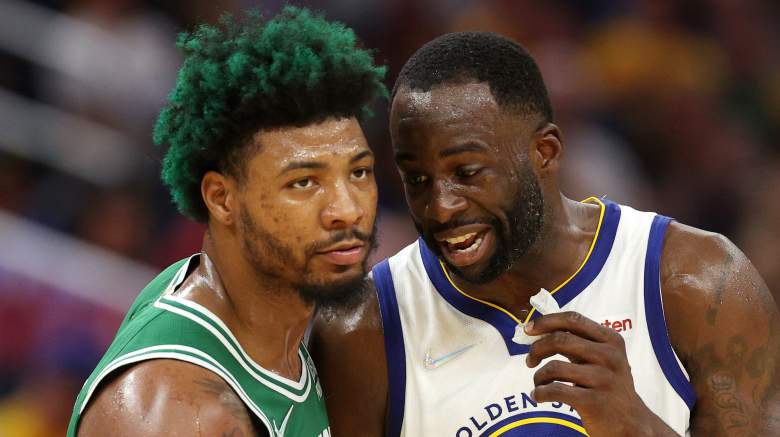 There has been a lot of back-and-forth between Draymond Green and the Boston Celtics, which has prompted the Golden State Warriors star’s mother to engage in the gossip.

Green’s mother, Mary Babers-Green, spoke about the Celtics and their “tough guy” mentality during an appearance at 95.7 The Game in the Bay Area.

“The crying was just ridiculous because they’re supposedly the tough guys,” Babers-Green said. “So if you’re a tough guy, why do you cry when someone gets hard on you? Just play the game. Just go ahead and play the game.”

The Celtics were critical of Green’s play, particularly Jaylen Brown, who feuded with him during a brief scuffle in the first half of Game 2.

“Don’t get involved. Just do what we do best. We don’t have time for that. Just come out and play basketball, let everything else take care of itself,” Brown told reporters on Tuesday. “I’ll come out, do my job. Everyone has to go out and do their job. We’re here to play basketball, so don’t get caught up in all the escapades and things like that. Just come out and play.”

Setting the tone for the Warriors in a Game 2 win with some rough play, Green pushed things straight down the line, picking up a technical error early and nearly getting ejected.

“I couldn’t live with myself if I was talking about my summer and we lose the NBA Finals because we couldn’t compete by force,” Green told reporters Tuesday. “So I guess that was just a way for me to understand that, like I said, this is my department. That’s where I’m supposed to lead, and I can’t let my boys down.”

While Draymond can take care of himself, playing his physical mark in basketball still scares his mother. But as she noted, it’s nothing new.

“The older I get, the more Dray scares me,” Babers-Green said. “But it is who is, I’m used to it. It’s nothing new. He has been since he was 6 years old. He’s the same guy. This is Draymond. If he thinks the game isn’t tough enough, he goes into character.”

Green sparked quite a debate this week when he called out some of his critics who played in the 1980s and ’90s, most notably Celtics legend Cedric Maxwell, who said the Warriors forward “would have been blown away” if he would have played the 1980s.

“Some of the guys who were talking weren’t the guys who were hitting people,” Green retorted. “Back then there were a couple of guys who would put you down, knock you out, foul you and get kicked out of the game: Bill Laimbeer, Rick Mahorn. But anyone walking around pretending to be that, you’re being bullied.”

Maxwel wasn’t too happy with Green’s comments and yanked the Warriors forward while going on NBC Sports Boston on June 7th.

“You always say nobody hit anybody. They ask Charles Barkley what happened when he and I got into an argument while I was in LA with the Clippers,” Maxwell said. “Draymond wasn’t even born when I played. … Draymond, ask your daddy who I was.”

“I thought he did a great job. It’s physical. We’re going to look at basketball today and they’re going to say, ‘Oh, basketball is soft.’ But then when you play hard it’s ‘Ah, he does this, he does that.’ I thought it was great,” Babers-Green said. “Keep doing it. I liked it. Someone has to do it.”

The Celtics are a 3.5-point home favorite for the Game 3 matchup, with the total set at 212.5 points.