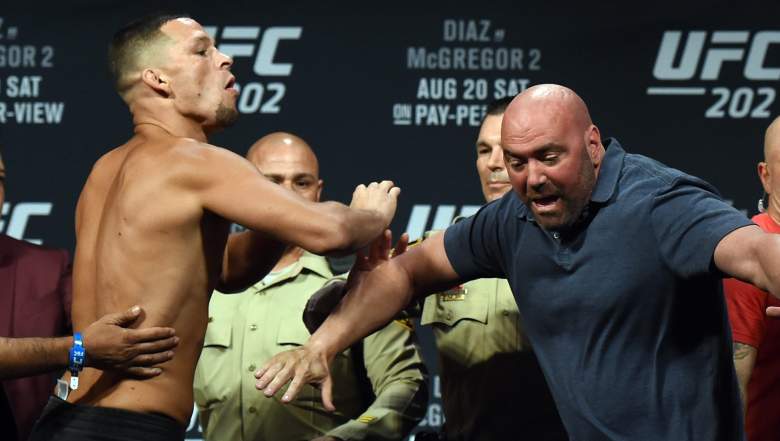 MMA superstar Nate Diaz recently took aim at the UFC after the promotion announced an NFT drop featuring him and his brother, Nick Diaz.

On April 20, which is regarded annually as “Weed Day,” the promotion revealed a new UFC Strike NFT sale called “The 209,” which includes video highlights of the Diaz brothers inside the Octagon.

“Stockton’s finest are here,” the official site reads. “The 209 Pack features UFC’s most iconic brother duo, Legends Nick and Nate Diaz. Celebrating the brothers’ Stockton roots, the 209 pack will include one Challenger Moment from each of their UFC careers: Nate’s trademark triangle choke of Kurt Pellegrino and Nick’s highlight-reel knockout of Robbie Lawler.

The promotion decided to drop the pack on April 20 likely due to the Diaz brothers being vocal advocates of smoking marijuana. Well, Nate took to Twitter a little while after the UFC published the tweet, slamming the promotion for leveraging the fighters’ love for weed.

Specifically, Diaz is upset because his brother faced a five-year suspension from the Nevada State Athletic Commission and faced a $165,000 fine after testing positive for marijuana. Nick failed a drug test after his UFC 183 fight with Anderson Silva in 2015. The punishment was ultimately reduced to an 18-month suspension and a $100,000 fine.

Although there is no information available to the public, Nate also claimed he was fined for smoking a “vape pen.”

In the tweet on 4/20, Diaz implored fight fans to not buy the NFT pack, and he also expressed that he wanted to leave the UFC.

“It’s s*** like this why I need to get the f*** out of the sorry a** UFC,” Diaz wrote. “Didn’t you guys suspend nick for 5 years and fine me hella money for a vape pen?! Now you’re reaping the benefits. I hope nobody buys this bulls***”

Diaz has frequently taken to social media to challenge fellow UFC fighters. He’s been campaigning to receive a fight since a little while after his June 2021 loss to Leon Edwards at UFC 263. However, 10 months later and the MMA superstar still hasn’t re-entered the cage.

Diaz only has one fight left on his UFC contract and it’s become clear that he intends to fight out the deal and test free agency.

Diaz has had several combatants in his crosshairs since October, including Conor McGregor, Dustin Poirier, Vicente Luque and Tony Ferguson.

The UFC has recently gotten into the NFT space, and UFC Strike offers a way for fight fans to purchase video clips of their favorite Octagon moments featuring their favorite fighters.

“Moment NFTs are unique, limited-edition NFTs of the most iconic video highlights of strikes, and more straight from the action in the Octagon,” the website further explains.