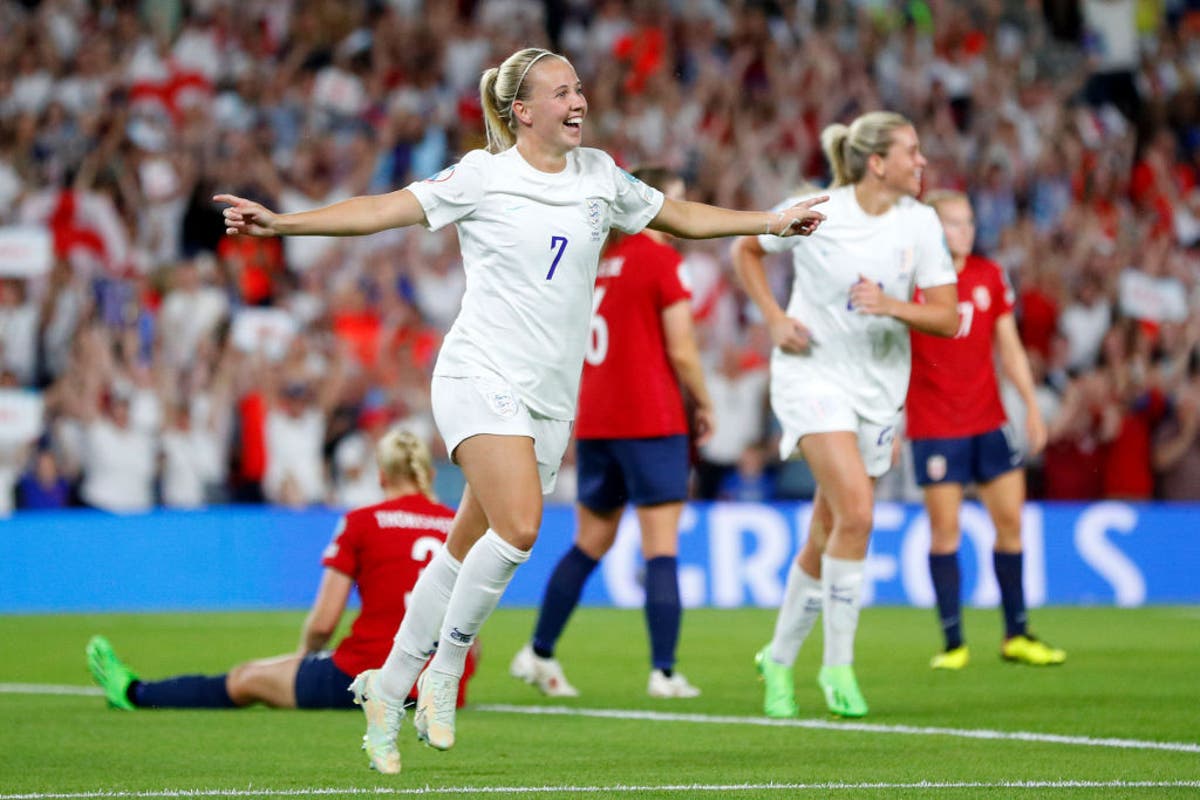 Hat-trick heroine Beth Mead admitted she and her England team-mates couldn’t quite believe what happened in the record-breaking 8-0 win over Norway.

The tournament hosts recorded the biggest win in Euro history, surpassing their own 6-0 win over Scotland in 2017 with a stunning performance at the Amex Stadium, where they scored six goals in the first half.

After Georgia Stanway’s 12th-minute penalty and a Lauren Hemp finish three minutes later, the Lionesses added four goals in just over 10 minutes, with their all-time leading scorer Ellen White now just one away, with Wayne Rooney, the men’s top scorer to equal at 53 – and Mead each net twice.

Substitute Alessia Russo then scored a superb, unprecedented seven in the 66th minute before Mead completed their treble with nine minutes remaining as Sarina Wiegman’s side remarkably secured a place in the quarters.

Winger Mead reflected on the departure of a Norwegian team ranked three places below them at No. 11 in the world: “I think if you had told us that (the day before) we probably would have all laughed at you.

“We couldn’t believe it on the pitch, as you could probably see from our faces, but I thought every player on the pitch was phenomenal. To be honest, we never dreamed of it.”

Having also scored the winning goal as England opened their season by beating Austria 1-0 at Old Trafford last Wednesday, Mead currently has four goals for the tournament.

The 27-year-old, who has scored 18 goals for England since falling out against Britain’s Tokyo Olympics squad last summer, said when asked about the possibility of finishing the Euros with the Golden Boot: “I would like to do, but I’m just happy to get back on the scoresheet and get the points for the team now.

“I’m part of a team game and I love playing for that team. So if I can help in any way I’m more than happy. (But) it would be a big bonus, yes!”

With Monday’s remarkable win to see them top of Group A, England return to Brighton a week from Wednesday to play runners-up in Group B in the quarter-finals, which includes Germany and Spain.

England’s group games conclude with Friday’s clash at St Mary’s against now-eliminated Northern Ireland, who lost 2-0 to Austria on Monday.

Mead’s Arsenal team-mate and England skipper Leah Williamson undoubtedly loved the result against Norway, which was also a bigger win than any other at the Men’s Championship, was a statement but also stressed “we’re not going to get carried away”.

Williamson said: “Of course it is (a statement). Every game in football you want to win and play as well as you can and (on Monday) everything we touched in the first half was worth its weight in gold.

“You have days like that, you also have days that aren’t like that. So let’s not get carried away.

“I think for us in terms of confidence and what the girls get from it – especially the girls who assist and score goals, some of the goals were incredible, I was at the back and it was nice for me – I think that’s really important for the girls.

Williamson added on the knockout stages: “I don’t think we were scared of anyone coming in. There’s a beautiful quote I like and it goes: ‘No one wins for fear of losing’. We go into every game to win.

“I’m really looking forward to every test, but of course a win like this (Monday) doesn’t hurt confidence.”

Williamson also spoke of the importance of “putting on a show”, as England did in front of a crowd of 28,847 in Brighton, saying: “Sarina really wants us to engage with the fans, but also with the people at home who.” watch television. That’s the kind of football I want to see when I turn on my TV.”