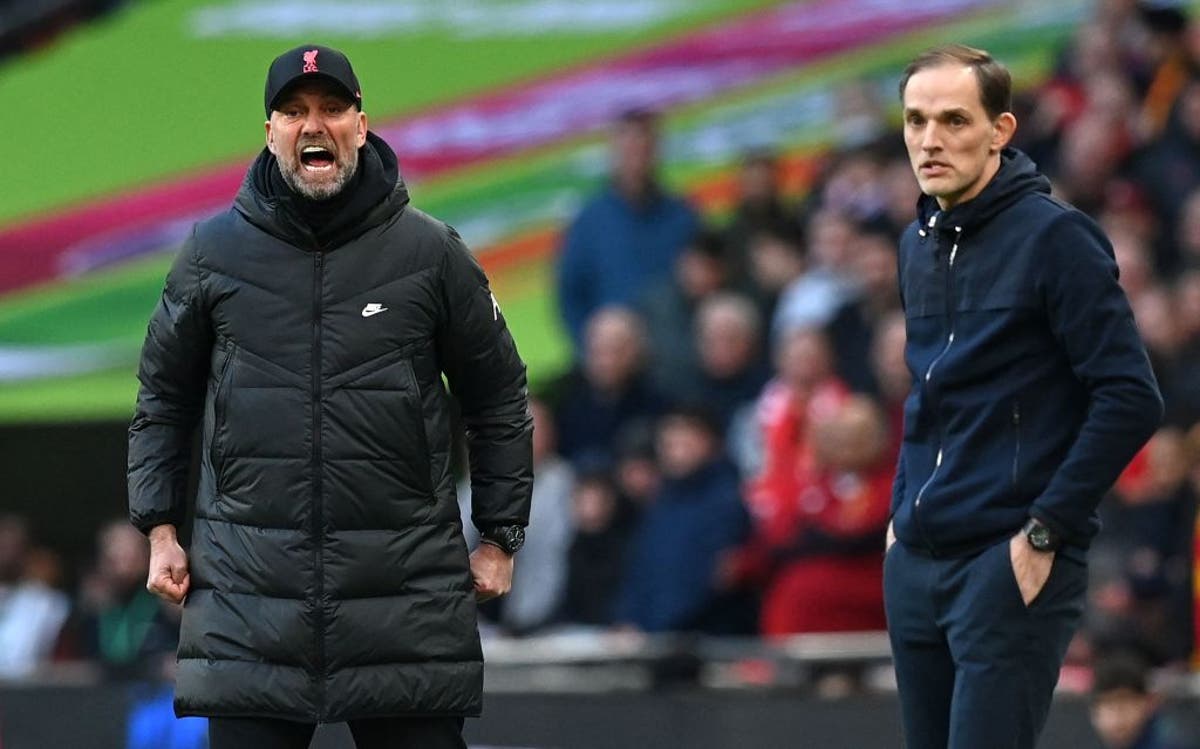 There’s always a sense of theatrics when it comes to matches between Chelsea and Liverpool. The teams meet in the FA Cup final at Wembley tonight and if the game is anywhere near as dramatic as February’s EFL Cup final it will be a classic.

Jurgen Klopp’s team emerged victorious three months ago after a 0-0 draw and a penalty shoot-out that saw the tension reach unbearable levels. For much of the last two decades there has been an attempt to create a rivalry between the clubs that goes beyond the natural level of antagonism. This device didn’t need an extra portion of friction. It has a lead well past the Jose Mourinho-Rafa Benitez days in the 2000s and some of the first shots have been fired in the FA Cup.

It took both clubs a long time to make a difference in the world’s oldest knockout tournament. Their 1965 semi-final showdown had tremendous significance. One of the clichés used in connection with the trophy is that it gives “unfashionable teams” a chance to capture the public imagination. In the mid ’60s, Liverpool and Chelsea were the trendiest teams in the game.

These clubs attained a cultural prominence that transcended the football arena in a decade in which British society was rapidly changing. The swinging sixties were reflected in the image of the teams. Beatlemania swept across the nation and beyond, and Liverpool was caught up in it. Bill Shankly’s team won the title in 1964 when the eyes of the world were on Merseyside. Much of the Kop’s fame stems from that moment when a BBC Panorama film crew came to Anfield to capture the moment Liverpool won the league. If the Beatles had shown up a year earlier than they did, cameras might have landed on Goodison Park as Everton were champions in 1963. A historic accident projected Anfield into the wider public consciousness.

At the same time, Chelsea became one of the symbols of “Swinging London”. The King’s Road was the capital’s most fashionable shopping district and Stamford Bridge was a stone’s throw from the boutiques of one of the most famous streets in the world. Celebrities and actors flocked to SW6 on Saturday afternoon. Chelsea had glamour. They had Raquel Welch in the stands while Liverpool had Cilla Black. The London club came out on top in that respect.

Their FA Cup semi-final was one of the defining games of the Shankly era. Neither of these teams had won the FA Cup, which at the time was a far more prestigious achievement than even winning the title. Chelsea, who had won the League Cup earlier in the season, were led by a new generation manager.

Like Shankly, Tommy Docherty was Scottish. He was 15 years younger than the Liverpool manager and was signed by Preston North End to replace Shankly when the older man’s playing days came to an end. Both men were full of swagger and Docherty suited the Flash-King’s Road ethos the same way Shankly projected Merseyside’s down-to-earth solidarity. Their teams reflected their personalities, from their jerseys to their approach on the pitch. Under previous managers, Chelsea and Liverpool wore white shorts. Docherty switched to all blue around the same time that Shankly went all red.

This was the beginning of a new age. Mind games began to become important. They have always been present in football, but in the 1960s they started to come out of the closet. Shankly was a champion and hit Chelsea with a double. Liverpool came to Villa Park first for the semi-finals and their manager was waiting for the arrival of “Docherty’s Diamonds”. Shankly met the upstart outside the dressing rooms, going on the offensive and saying: “Doc, your team is good enough to win the trophy next year.”

Then Shankly got to work on his own site. He came across a leaflet prepared by Chelsea in case they reach the final – Terry Venables, the midfielder who later became England manager, is said to have been the man behind the fake marketing material. The Liverpool boss returned to his players in a state of fake outrage. He sent his team off with these words in his ears: “Stuff these wee cocky Southerners.” They won 2-0. The Liverpool Echo got all Churchillian about the performance, calling it the club’s “finest hour”.

The significance of 1965 was that Liverpool won the FA Cup for the first time with a 2-1 win over Leeds United. It was the moment Anfield stepped out of Everton’s shadow. Up to this point, Goodison had been the home of the Merseyside premier team. The balance of power shifted.

Chelsea ruined Shankly’s prediction by failing again in the semifinals the following year. They had to wait until 1970 to win their first FA Cup, but they did it in an unforgettable way. The final had to be replayed and both games went into extra time before Dave Sexton’s side – the Englishman was Docherty’s replacement – ​​secured a 2-1 win. It was the culmination of 240 minutes of pure mayhem in the bloodiest finale of television. Videos of the games can be found on the internet. Tackling is not for the faint of heart.

The Doc had to wait 12 years but when his revenge came it couldn’t have been more painful for Liverpool. He managed Manchester United in the 1977 FA Cup final and his side’s 2-1 win cost Bob Paisley’s side the treble, a feat only matched by Sir Alex Ferguson’s Red Devils.

Today’s finalists have a similar record in the cup. Chelsea have won the trophy eight times, Liverpool have triumphed seven times. They met in the final ten years ago when the Londoners prevailed 2-1. But the 1965 semifinals set the tone for the relationship between the teams. Liverpool and Chelsea have had some titanic battles in the top flight, FA and League Cups and knockout rounds of the Champions League.

Today’s game reflects the tradition that began with Shankly and Docherty: two glamorous clubs with charismatic managers, outstanding players and a tendency to create drama in their encounters. The sixties have long since stopped swinging, but the dynamic between Liverpool and Chelsea is stronger than ever. An epic finale awaits.