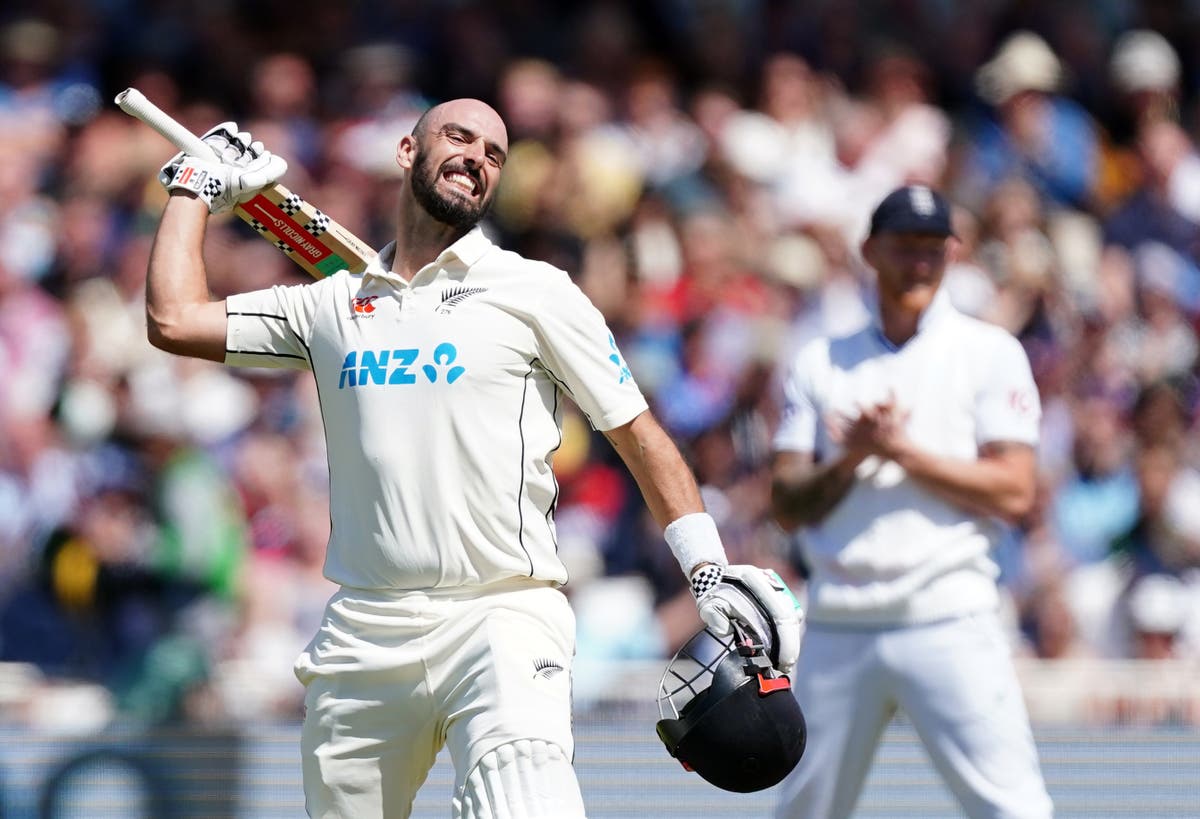 Alex Lees and Ollie Pope rode their luck and kept their nerve as England tried to build a worthy response to New Zealand’s record total in the second LV= Insurance Test.

Spurred on by 190 sterling from Daryl Mitchell and 106 from Tom Blundell, the tourists helped themselves to 553 – their highest score on English soil.

After 145.3 overs of hard work on the field, the mix of pressure on the scoreboard and tired legs looked like a recipe for disaster for the hosts, who lost opener Zak Crawley just 12 balls from the reply.

But they were able to bounce back to 90 for one at stumps after Centurion Mitchell knocked down both Lees and Pope in a slip.

Mitchell had benefited from an early lucky charm himself, dropped by Joe Root to just three, and England must hope at least one of their overnight duos cashes in just as emphatically.

Lees made an encouraging 34 not-out, his best performance so far in a short international career, while Pope’s 51-no offered tantalizing glimpses of the dominant county batsman who has too often shrunk in an England shirt.

But their efforts so far are a start and nothing more. New Zealand have had the luxury of a decent points tally and plenty of room for error as they chase wickets on Sunday.

Crawley will kick himself after falling to four – the 20th single-digit result from his 41 England knocks – but it took brilliant New Ball bowling from Trent Boult to grab the edge.

Lees could have fallen similarly when he hit Tim Southee on 12 with a chance to dodge Mitchell on the first slip.

The left-hander groped his way into the innings, leaving well and picking up the width, but it was Pope’s bright display that will most delight an England line-up, who doubled their investment in his promise by promoting the 24-year-old on Third place despite a modest test record.

He beat Matt Henry for sixes on a few occasions, but also produced a string of glorious cover drives that got his Surrey fans nodding in approval.

It would have meant precious little if Mitchell had snapped his nick at 37, but like Lees, he lives to fight another day.

New Zealand started 318 for four, with Mitchell taking 45 minutes to convert his overnight score of 81 into his second hundredth in as many innings.

With only 11 Test caps to his name at age 31 and not even a guaranteed middle place to start this tour, his stock has risen exponentially over the past two weeks.

His stint should have ended shortly thereafter, when he hacked Jack Leach high in the air at 104, only for Matthew Potts to increase England’s match tally of missed chances to five when the ball slipped through his hands and into the rope.

At the other end, Blundell was warming up well as he attempted to match the century he eluded by just four runs at Lord’s.

He nearly made it in front of Leach with a six, but his Steeling shot landed right on the ropes and he had to settle for matching it with an escaped single.

Like Mitchell, he offered a chance almost immediately, but as he dragged the spinner to Ben Stokes, the captain held on.

That was a lone success in the first two sessions as Mitchell’s fluency allowed New Zealand to add 94 before lunch and another 69 in a rain-shortened afternoon session.

Michael Bracewell made a handy cameo on the debut, bringing in a reckless 49 from number seven.

While James Anderson and Stuart Broad took an extended break in the middle of the day, England’s remaining bowlers shared some tired-looking spells.

The break in rain seemed to freshen England’s legs and they eventually halted one-way traffic as the veterans went back on strike three times in quick succession.

Anderson had passed Bracewell with an outswinger before Kyle Jamieson and Southee both flapped from short balls off Broad.

Leach grabbed Matt Henry for a golden duck as he chipped to the point, but Mitchell and Last Man Boult added another 33 for the final wicket to break the overall record.

Mitchell’s fun ended when he passed a slower ball from the Potts to the keeper, leaving England with an impressive position to stare down at.