Lakers’ Dwight Howard complains about Big 3: “Me and Rondo are left out” 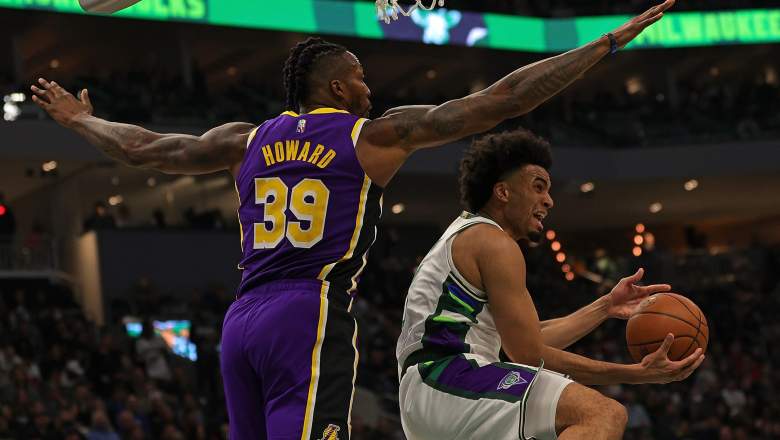 If you share the word with LeBron James, Russell Westbrook, and Anthony Davis, touch will be hard to come by. However, Dwight Howard doesn’t care how many times he touches the basketball. Instead, he wants the recognition he thinks his career deserves.

Howard speaks to Tyler R. Tynes for an exclusive interview with GQ on how the media is currently portraying the Lakers. Or, to get to the point, how some of the Lakers get all of airtime.

“I watch when ESPN highlights the Lakers: Obviously they’ll be showing LeBron and Anthony Davis or Carmelo Anthony and Russell Westbrook. And me and Rajon Rondo are left out like we haven’t done great things in our careers. Like we weren’t great, ”Howard said to Tynes.

It’s not that Howard doesn’t feel that his teammates deserve the praise and attention; rather, he believes that both himself and Rajon Rondo belong in these conversations. During the interview, Howard went on to explain what he meant: “We are always excluded from certain things. I try not to look too deep, but it does. We have achieved extraordinary things in this league and we still are. So, while we’re playing, we should get some credit for our hard work. I don’t want anyone to kiss my butt or anything. But appreciation should go a long way, especially when people are alive. “

With Howard’s third stop in Los Angeles this season, after a disastrous first appearance and a second attempt that resulted in a championship ring, the future Hall of Fame big man wants recognition for his influence on the game and his career as a whole.

As you go through the interview, it becomes clear that Howard’s problem isn’t with the Lakers, nor with the teammates getting the extra attention. But it’s clear that he feels undervalued by both the media and the league as a whole.

“People think I’m trying to blame the NBA for certain things, but I look at how certain things have happened in my career and I know some of those things are not on me. I’ve seen how seldom people talk about me when they mention it [the Lakers]. It’s like I’m an afterthought. How goddamn it, “Howard said to Tynes as he talked about his” Top 75 “snub.

In his 18th season in the NBA, Howard averaged 4.9 points, 4.6 rebounds and 0.8 assists in 13.4 minutes of play from the bench. Howard’s influence on the game, now 35 years old and deteriorating in athleticism, has been based on his understanding of the game and knowing where to position on the ground, a career point many players his own kind never reach.

On a Lakers team made up mostly of aging stars who are all chasing one final shot to stardom, Howard is another piece of the puzzle. While his efforts don’t get the airtime from fellow veteran Carmelo Anthony, his contributions to the team are just as significant.

Howard, a former first draft selection in 2004, has competed in 18 NBA seasons, accumulating nearly 20,000 points, 14,350 rebounds and 2,203 blocks in 1,199 games during the regular season. And we still have three quarters of the 2021-22 NBA season to play; You can be sure that these numbers will keep increasing.

Despite his 8 dominant years with the Orlando Magic, Howard couldn’t finish his time there with a championship ring before playing with the Lakers, Houston Rockets, Atlanta Hawks, Charlotte Hornets, Washington Wizards and Philadelphia 76ers. However, it wasn’t until Howard’s second stay with the Lakers that he finally won a championship in the so-called bubble season of the NBA.

Regardless of current media attention and the fact that his teammates are currently receiving more credit than he is, Howard is undoubtedly a future NBA Hall of Fame player, and that legacy will ultimately mean more to him. But if the Lakers can figure out their tough start to the season and fight for another championship, it’s obviously doubtful that Howard would not consider his possibly final season a success.