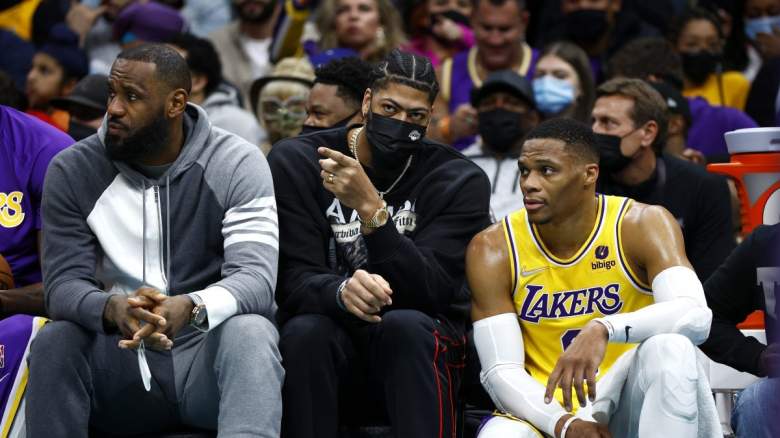 The Los Angeles Lakers had a disastrous 2021-22 season. They missed the playoffs despite LeBron James, Anthony Davis and Russell Westbrook, and the players were booed numerous times during home games for not living up to expectations.

The Lakers had the second best chance of winning the title last season. Their Big Three of James, Davis and Westbrook have been projected as lethal. However, the three All-Stars only played in 21 games together. The Lakers went 11-10 and Westbrook proved a terrible fit alongside James and Davis due to his lack of perimeter play.

Westbrook, 33, shot 29.8% from beyond the arc and his 47.6% effective field goal percentage was the sixth worst in the NBA.

The Lakers fired Frank Vogel as head coach on April 11. Metta Sandiford-Artest, who played 358 games with purple and gold and was part of the 2009/10 championship squad, believes Vogel did a “great job” in 2021/22. However, the former Defensive Player of the Year understands why Vogel was fired.

“I think he did a great job,” Artest told SNY’s Ian Begley. “But it was tough. Lakers are a tough city, you gotta win. And he wasn’t able to bring this crew together in the way fans would like. So they did what they had to do.”

In addition to praising Vogel, Artest spoke to Begley about James, Davis and Westbrook.

Artest believes the Lakers will be “fine” as long as Davis stays healthy. The New York native isn’t worried about James and thinks Westbrook’s problems are “fixable.”

“I think the Lakers will be fine if [Anthony Davis] you better come back,” Artest told Begley. “LeBron [James] is good. LeBron is incredible. And then [Russell] Westbrook, not the best season but I believe in him. I think all of his problems are fixable for me, honestly. Every single one of them. He is someone I would definitely like to coach. A player like that, someone you can bail out of, that’s a real challenge.”

Davis only played 40 games in 2021-22 due to injuries. He averaged 23.2 points and 9.9 rebounds. The Chicago native has appeared in 76 regular-season games since winning his first title in 2020.

James had a brilliant 2021-22 season. The king averaged 30.3 points, 8.2 rebounds and 6.2 assists and recorded 21 double-doubles and six triple-doubles. However, like Davis, James was bitten by the injury virus. The four-time MVP only played 56 games.

Artest thinks James, Davis and Westbrook can live together. Westbrook has a player option worth $47,063,478 for next season and is expected to pick it up as he can’t get that kind of money on the open market.

If the Lakers don’t trade Westbrook this offseason — and finding a team to trade for the guard will be difficult given he owes so much money — Jeanie Buss and Rob Pelinka will need to find the right coach.

The Lakers have asked coaching candidates questions about Westbrook, according to The Athletic’s Sam Amick. It seems Los Angeles is bracing for the possibility of keeping Westbrook, who was born and raised in California.

“More specifically, the idea of ​​Russell Westbrook remaining part of their program seems more and more real,” Amick said. “Despite the widespread belief that the Lakers would find a way to trade Westbrook before the start of next season, sources said their coaching candidates were asked to discuss how they would use him in their system during interviews. The takeaway for candidates appears to be that maximizing Westbrook’s presence after his disastrous 2021-22 season will be seen as an important part of this job.

According to Los Angeles Times’ Dan Woike and Broderick Turner, Westbrook never respected Vogel from day one, so the Lakers will need to hire someone who gets along with Russ if the explosives warden is on the team in 2022-23.

According to Los Angeles Times’ Dan Woike and Broderick Turner, Westbrook never respected Vogel from day one, so the Lakers will need to hire someone who gets along with Russ if the explosives warden is on the team in 2022-23.