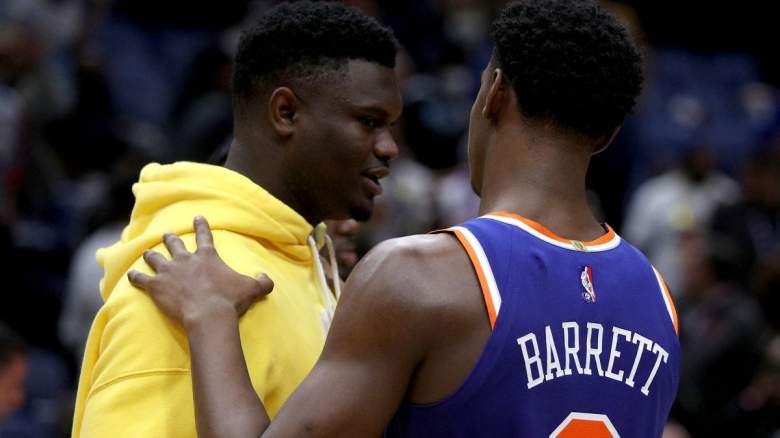 Zion Williamson has been the dream destination for New York Knicks fans for the past 12 months. If the rumors are to be believed, the former first draft pick is unhappy with his situation in New Orleans and could potentially request a swap rather than signing a contract extension.

Those dreams quickly turned into nightmares, however, when news broke on June 11 that Zion was planning to renew his rookie Max contract, with ESPN’s Andrew Lopez saying, “I want to be here. That’s no secret.”

For a Knicks franchise that has been starved of starting talent for the past few years, Zion is expected to be their savior and the player usher in a new phase of confrontation. However, the North Carolina native is highly unlikely to be available anytime soon, daunting New York’s hopes of welcoming a true superstar to their ranks.

Williamson is ready to sign a $186 million maximum rookie extension with New Orleans this summer, but as Lopez reported on June 11, the Pelicans are likely to add some protections to his deal rather than guarantee the full amount. The 6-foot-1 forward has struggled with injuries since joining the league and only appeared in 85 games in his first three seasons in the NBA, so those protections will likely be tied to his ability to stay healthy going forward.

While any chance of landing Zion in the immediate future is all but gone, there’s still a chance he’ll try to force a move in the future. At the moment, signing his rookie extension is the smartest decision from a financial perspective but although the young star has reaffirmed his loyalty to the Pelicans, that could change before the end of his next contract.

We see it all the time. A disgruntled star re-signs with the team and just a year or two later they start looking for a way out of town. Now, that doesn’t mean Zion will follow that path, but it doesn’t mean he won’t either. The downside for the Knicks is that they can’t keep working toward a “maybe.”

Positioning your squad for the cap spot often comes at the expense of success. However, as New York continues to develop its young talent and build through the blueprint, it will have a steady stock of tradable assets should Zion or some other young star suddenly become commercially available.

While Zion Williamson’s dream may be dead, or at least dormant, the front office is exploring the idea of ​​bringing back former superstar Carmelo Anthony for one final run with the team he spent six and a half seasons with.

According to a recent article by Marc Berman of the New York Post, members of the team’s front office have toyed with the idea of ​​bringing Anthony back to New York for a last-minute deal, though that decision isn’t among their priorities at the time.

“According to a source, Knicks Brass has had internal discussions about Anthony, even though more pressing concerns about rebuilding a franchise that has missed the playoffs eight of the last nine years have taken precedence,” Berman wrote.

Anthony’s return wouldn’t give the Knicks a star to brush up their lineup, but it would give the team an experienced goalscorer off the bench who would help steady their offense during the regular season. After all, Anthony averaged 13.3 points, 4.2 rebounds and one assist per game with the Los Angeles Lakers last season while shooting 37.5% from deep and 44.1% from the field — so there it is clear that he still has a lot to offer.