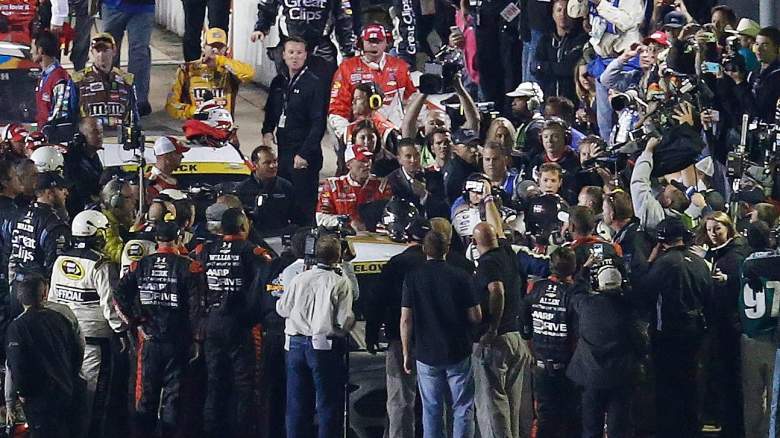 In 2014, Brad Keselowski and Jeff Gordon engaged in a pitched battle after a Cup Series playoff race at Texas Motor Speedway. Now Kevin Harvick has explained why he pushed Keselowski and started the fight.

The 2014 Cup Series champion shared the insight during an appearance on Stacking Pennies With Corey LaJoie. He said he deeply regrets his decision to bring Keselowski closer to Gordon. Harvick also detailed why he made this infamous move.

“I know what I was thinking when I pushed him into the fight and then it caused chaos,” Harvick said. “For me, my thought was, ‘Man, we didn’t win tonight. We need chaos.’ We ended up making it to Homestead.

“…We wanted the story to go somewhere different than us and out of the competition. It did exactly what I wanted, but it’s not the best your kids can find on YouTube to start the fight.

An interesting detail from the conversation is that Harvick said Kyle Busch won the championship. He made a mistake. The fight took place in Texas in 2014 after Jimmie Johnson won the race. Harvick won the last two races of the year and the championship. Busch’s first championship was the following season.

The fight was the result of a late restart at Texas Motor Speedway. The field lined up after a crash involving Clint Bowyer and prepared for a restart in overtime. Gordon, a point below the cut line, lined up on the outside while Johnson took over the inside. Keselowski was behind Johnson while Harvick was behind Gordon.

As the green flag flew, Johnson pulled ahead as the rest of the field battled for second place. Gordon moved down the track while Keselowski climbed up after a big run, leading to contact between them. This cut Gordon’s tire and caused him to spin into the middle of the field. However, he managed to avoid being hit by another driver.

Gordon had to come down the pit lane for fresh tires and fell back a lap after failing to hit the No. 48 back onto the line. Gordon finished 29th overall while Johnson, Harvick and Keselowski finished 1-2-3.

29th place hurt Gordon’s championship hopes. He entered the final race of the round of eight with no points cushion, missing out on championship four after Ryan Newman’s final lap passed Kyle Larson and eliminated the No. 24 team from the competition.

There were several interesting comments from Harvick during his appearance on Stacking Pennies with Corey LaJoie. His regret over the 2014 Texas brawl was one that jumped out. Another was Harvick, who explained that he occasionally stirred the pot because he “needed to put on a show” when he wasn’t fighting for a win.

Another intriguing moment in the conversation was when Harvick explained how he’s changed over the years. He spoke openly about the tensions between himself and other members of Richard Childress Racing. He explained how he could have avoided that with a different approach, by being a communicator and having a better understanding.

The situation changed significantly when Harvick teamed up with Rodney Childers at Stewart-Haas Racing. Childers told him that he would not run in cars, yell and do many other things that he had done at RCR.

“From that point on, I realized I was just a part of this process,” added Harvick. “I can’t just be the idiot who walks in and says, ‘You’re stupid, our cars are terrible.’ Just scream and scream this and that. It won’t fix anything.”

The change in approach has resulted in Harvick ending a career worthy of the Hall of Fame. He has 60 career wins in the Cup Series, won the championship and is within reach of 800 career starts.